Free-scoring Bulls get back to winning ways 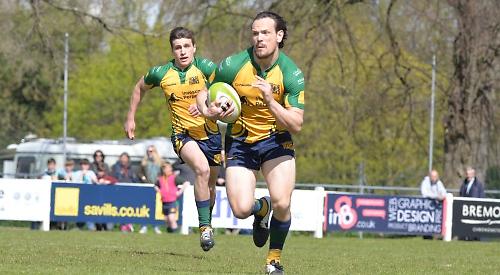 HENLEY BULLS returned to winning ways with their fourth bonus success in five games against Worthing Raiders A last Saturday.

Showing good creativity that the Raiders struggled to contain, the Bulls bagged the bonus point prior to the interval while the visitors scored at either end of the encounter.

The Bulls stacked up five tries in each half, eight of which came from the back division whose success was based on the work of the Henley pack. With Matt Thomas returning and linking with Charlie Davey to add power to the scrum and an extra vitality to the line-out, and the often less obvious work of Tommy Haynes and Iwan Davies in the back row, the possession the Bulls did create was plentiful and allowed new open side Matt Marley to play a roaming role which he did with gusto. Lock Davey made ground on several occasions smashing his way upfield with Joe Butler at fly-half orchestrating the early forays through his forwards.

The biggest switch in form came at the scrum where prop Elliot Wigmore stepped in to assist Jamie Woodstock in the front row. Woodstock’s form has been consistent since returning to action a month ago and the props’ efforts in breaking out of their own half assisted directly in two of the Bulls tries where hooker Charlie Sichel sprinted under the post at one end of the field, and also aided in putting Thomas in for a score from a short line-out whilst centre Louis Flynn showed his class with a break to score at the other end after the break.

Dave Hankinson and Butler linked throughout the game to continually find the chinks in Worthing’s armour, both creating line-breaks galore and although both players deservedly scored tries which included a brace for Hankinson and a fabulous individual effort from Butler, they were less than selfish in sending others over the line.

Fullback Luke Govier was forced out of the action just before the break and Nick Arnell came in on the wing as Liam Eaton moved to full-back and Harry Burn to his preferred position at scrum-half but not before Burn had wriggled his way over for a try.

Josh Collis and Jimmy Wright took the field in the second half and both made an immediate impact with Collis making two line-breaks and Wright restoring the tempo of the Bulls attack as it dropped off. Matt Marley, making his debut on the open side had an enormous influence on the flow of the game linking with Haynes and the abrasive Iwan Davies and often appearing in the wide channels where his galloping style and quick feet gave the Bulls territorial gains and his own individual try where he showed his full skill-set in dummying and side-stepping to crash over.

The eagerness to support the ball carrier was evident and with plentiful manpower at ruck time the Bulls dominated the middle 60 minutes of the game in every aspect. Arnell burst through two tackles out wide to score and on the opposite flank the experienced Simon Perry was cutting angles and coming in off the wing to scythe through the midfield and was eventually rewarded with a score as he kicked through and re-gathered to touch down.

The Raiders rallied during the closing stages but good defending from Louis Flynn allowed the Bulls defence the time to reorganise although finally with their energy spent in sustaining the attack the Bulls gave way to a late consolation try.