Jackson returns to form with boot as Hawks stop the rot 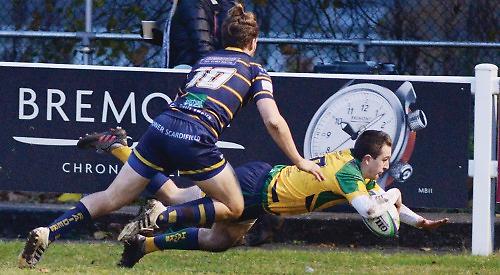 Each side scored three tries but the Hawks had the edge by means of a return to kicking form of scrum-half George Jackson who was successful with every kick in this game whereas the previous week he could only convert one try out of three and missed two penalties. Jackson accumulated 17 points altogether through three conversions, two penalties and a try. In contrast Worthing’s kicker Matthew McLean scored two conversions and a penalty.

It would be wrong to judge this game purely as a kicking contest on a cold wintry afternoon, far from it as far as the Hawks were concerned. From the start they showed energy and enthusiasm which has not been in abundance in recent matches.

In the first minute of the game the home followers were concerned that the pattern of recent weeks of starting lethargically was to be repeated as they conceded a penalty but from 35 metres Mclean gave a hint of failures to follow when he sent his kick wide.

The Hawks’ response was to take the game to the opposition with accurate running and handling by their backs and aggressive play in the loose by their forwards. This resulted in Raiders’ centre Finlay Coxon-Smith illegally stopping a Hawks attacking move in the Raiders’ 25 which presented Jackson with the opportunity to put the Hawks in the lead with a penalty from an easy kicking position.

The Raiders were now under pressure as the Hawks used driving mauls to pin them down. Hawks number eight David Hyde exploited this when he grounded a try in the 21st minute which was converted by the in-form Jackson. Ten points in the lead the Hawks were now full of confidence with the opportunity to put the visitors’ backs to the wall. However, in developing some promising handling movements, which threatened to breach the Raiders’ defence, there was careless off loading in the centre which with the resultant turnovers let Worthing into the game.

Firstly they got points on the board by means of a successful penalty by Mclean and then their backs created a try. Centre Kiba Richards, a big strong runner, was difficult to hold. Although he was controlled he chased a cross kick which finished under the Hawks’ posts and used his strength to touch down which with the easy conversion levelled the scores at 10-10. The Hawks managed to sneak ahead at half-time, 13-10, courtesy of a Jackson penalty.

The Hawks started the second half strongly. With control of possession they surged forward down the left. Fly-half Tom Parton was put in possession and using his pace, with guile, swept past half-a-dozen Worthing defenders who were unable to stop him on his way to touching down a try which Jackson improved to give the Hawks a 20-10 lead.

This was short lived for the Raiders immediately took play into the Hawks’ 22 and proceeded to outwit a sparse defence which centre Coxon-Smith brushed aside to score, which on this occasion was converted by McLean to narrow the deficit to 17-20.

The Hawks, shaken by this reverse, immediately took play to the edge of the Worthing 22 area. They appeared to be stymied there with no clear plan of attack, stuttering to proceed, when wing Alan Awcock came into possession and seized the initiative to drop a goal from 35 metres, putting the Hawks 23-17 ahead.

With restored confidence the Hawks now established themselves in the visitors’ 22. They then attempted to put themselves further ahead using driving mauls. During the course of the game they had resorted to this method of attack but a stubborn Raiders attempt had refused to yield. However, on this occasion Jackson was able to support this tactic and when the defence wilted he spotted a gap to drive through to touch down which with his conversion put the Hawks 30-17 ahead.

The Raiders were to live up to their name and stormed to the Hawks line where number eight Robert Smith drove over for an unconverted try. With the score at 30-22, and just three minutes’ playing time left, Worthing were in no mood to surrender. They camped on the Hawks line who, under severe pressure, tested referee David Clarkson’s patience, who in quick time gave yellow cards to Alan Awcock and Stuart Philpott.

There ensued two line-outs just 10 metres from the Hawks’ line both in favour of the Raiders. The Hawks’ forwards rose to the occasion, held their line, and captured both throw-ins as the hosts survived to earn valuable league points.