Woodward's treble helps visiting Abbey side get back to winning ways 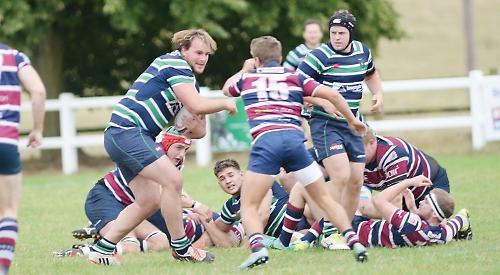 ABBEY made a return to winning ways with a bonus point victory at Chippenham. The visitors dominated for long periods against a side which has struggled for consistency this season following relegation from level five.

Abbey’s pack looked particularly impressive, and it was appropriate that a forward, number eight Will Woodward, should score three of their four tries.

What wind there was on a glorious late-autumn afternoon favoured the visitors in the first half, and Chippenham were instantly under pressure when outside half Harry Taylor’s kick-off failed to go 10 metres. The first scrum was solid, and skipper Sam Hallett and centre Arron Ross launched the opening attack, well supported by scrum half Will Bevan and flanker Chris Shaw.

Ross set up a 15 metre dash for winger Jules Greenaway as Abbey remained in Chippenham territory. Flanker Maurice O’Connell claimed the first line-out ball of the game, and a clever pass from centre Olly Walton gave fullback Gavin Dampies his first run of the afternoon. Continued Abbey pressure seemed certain to result in a try, and it came in the eighth minute. Greenaway made the initial breakthrough, prop Ed Whelan and outside half Luke Burns supported well, and Woodward applied the finishing touch, thundering in under the posts to give Walton an easy conversion.

Abbey continued to put the Chippenham scrum under pressure, and although the home forwards attempted to pick and drive into the visitors’ half, Abbey drove them back, with Woodward and O’Connell both defending well.

The next scrum saw Abbey pinch the Chippenham put-in, and after a fine run from winger Charlie Gingell another good kick from Burns forced Chippenham to concede a line-out 10 metres from their own line. Knights again won the ball, Hallett and Woodward drove and Abbey were awarded a penalty under the posts. This should have provided an easy three points for Walton, but such was Abbey’s confidence in their scrummaging superiority that the decision was taken to go for a five-metre scrum. A try resulted, but not in the manner anticipated. Chippenham managed to force Abbey backwards, but they still won the ball and Woodward galloped away to the left corner where he crossed for his second try. Walton could not add the extras.

The home side now enjoyed their best spell of the game, making 15 metres from a maul and then laying siege to the Abbey line. Good defence from Shaw and O’Connell prevented a try and despite conceding two penalties Abbey survived. Eventually, Chippenham tried to move the ball wide to the right where Bevan brought off a good tackle.

Chippenham continued to attack, forcing Abbey to concede another penalty which was kicked to the corner. Abbey were under pressure, but a vital steal at the line-out from Shaw got them off the hook. Burns kicked Abbey to safety, and a third try followed soon afterwards. Woodward picked up from the base of a scrum and handed on to Greenaway, who burst clear up the left wing. He was tackled 10 metres short of the line, but Bevan was up in support to finish off a good move. Walton converted to put Abbey 19-0 ahead.

Ellaboudy claimed the restart, but Chippenham were soon on the attack. This time they managed a try when, after winger Brad Doggett had gone close, fullback Sam Saunders moved the ball left and flanker Sam Graham was up in support to score. Saunders added the conversion.

An extraordinary incident followed, with Chippenham almost grabbing another try from the restart. Burns elected to do a grubber kick into the home half, but a kind bounce allowed flanker Ed Hendy to catch the ball. He was well inside his own half, but he set off on a run which took him all the way to the Abbey try line. As he was touching down for what would have been a memorable score, referee Nick Heath penalised Chippenham because Bevan had been taken out off the ball. Burns found touch from the penalty, O’Connell won the ball and Abbey were back in the Chippenham half. Here, Walton attempted an ambitious penalty kick from 42 metres, but his effort was well wide of the posts. The home side did manage further points in first half injury time, Saunders kicking a good penalty to make the score 19-10 at the break.

Early in the second half Abbey claimed the ball against the head on the edge of the home 22 and this resulted in the bonus point try. Hallett, Knights and Shaw all made ground with the ball, and Burns then gave the scoring pass Woodward’s hat-trick try. Walton’s conversion against the wind just crept over the bar to make the score 26-10.

Abbey continued to dominate. Greenaway set up Dampies for a 60-metre burst which nearly resulted in a fifth try, and after the forwards won another scrum against the head Shaw and Greenaway ran well.

Chippenham then had two consecutive attacking line-outs, but poor throwing on each occasion gave Abbey the possession. After an hour of play Ellaboudy replaced Knights, and Greenaway, Gingell and Burns linked well in another attack. Graham was yellow carded at this stage for a dangerous tackle on Burns, but Abbey were unable to take advantage of his absence.

Play from both sides became increasingly ragged as full time approached, although Whelan had an encouraging run for Abbey. Graham returned from the bin and won a series of good lineout balls for Chippenham, and with a minute of normal time remaining Doggett was driven over for a consolation try after good work from the home pack. Saunders could not convert.