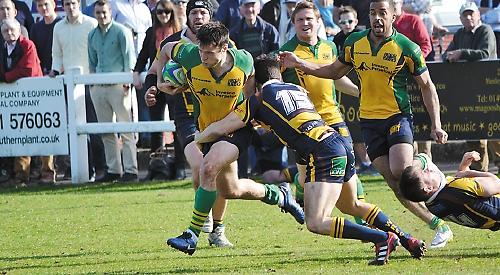 FOR the second time in as many weeks the Hawks conceded two tries in the last 10 minutes of a game and failed to win any bonus points despite looking the better team for much of the game.

In this instance they exhibited at times skilful handling and running to put Taunton Titans on the rack and led 27-23 after 52 minutes. From there on the Hawks let Taunton off the hook through bad decision-making which lowered the morale of the team.

Once again they made a sluggish start after Titans’ fullback Gary Kingdom Hawks and George Jackson exchanged penalties in the first seven minutes.

Taunton took advantage of some slack defence at the back of the scrum, after Kingdom had kicked a second penalty, to allow scrum-half Lewis Webb to score near the posts which with the conversion, by Kingdom, made the score 13-3.

The Hawks continued to be in the doldrums when they allowed the aggressive running flanker Dan Frost to touch down the first of a hattrick of tries. Not a bad achievement for a hooker turned flanker.

After 28 minutes the Hawks backs began to show what they could do with ball in hand and produced the try of the game. Starting on the halfway line they moved the ball at pace to the right wing where, on the outside, centre Liam O’Neill streaked down the wing past any Titans cover to touch down for Jackson to convert mid-way from touch.

Within five minutes Frost had again retaliated with the Hawks defence again found wanting but so was Kingdom’s attempt of a conversion. The Hawks responded with an attack down the right wing and then worked the ball into the centre near the posts where Kiwi prop Barnaby Abdale-Weir forced his way over for a maiden try to make the half-time score 23-17.

Immediately after this score O’Neill suffered a head/neck injury which resulted in the game being halted for 10 minutes and led to him being taken to hospital.

On the resumption the Hawks dominated play which was in the home half and led to the visitors taking the lead for the first time when number eight Marcus Lowe forced his way over the Titans line between the posts making the score 27-23 in their favour with Jackson’s conversion.

The Hawks were now clearly on top aided by some decisive breaks by fly-half Tom Parton of up to 40 metres which were unsupported with the absence of O’Neill being an important factor. They could have put Titans firmly on the back foot by scoring from three penalties, one of which was ambitious from half way whilst Titans had a man in the sin bin. Kingdom the leading points scorer of the league also missed three kicks in the course of the games in the cold drizzly conditions. The Hawks then lost control of the game as prop Alec Chase forced his way over for a converted try and Frost completed his hat-trick. Kingdom could not convert this but completed the scoring with a penalty from in front of the posts on the final whistle 38-27.