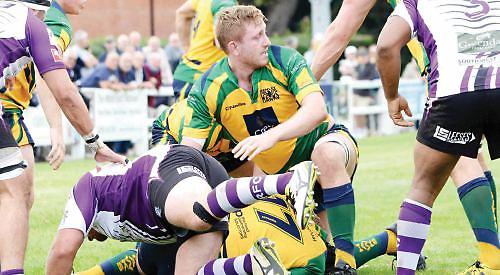 A LATE try ensured hosts Henley Bulls took a share of the spoils from their clash with visitors London Scottish Highlanders on Saturday.

The Highlanders gained much of the ascendancy in the first half and the Bulls dominated much of the second half in clawing back a share of the spoils.

Veteran front row duo Simon Matthews and Rowan Fuller returned to shore up the Henley scrum and turned the set-piece into an attacking platform for the Bulls with Elliot Wigmore at tight-head less than half their age.

The Bulls have seen much of their back division from the early part of the season promoted to the Hawks starting line-up or bench and this week Louis Flynn and Dave Hankinson stepped up allowing Will Janes and Nick Arnell to form a centre partnership for the first time.

The Highlanders opened the scoring with a breakaway try as their number eight gathered a loose pass on the Bulls 22 and broke the home defence to gain the upper hand. At the other end of the field the Bulls responded with live-wire Harry Burn muscling his way over between the posts from a short distance for Howe to convert with ease. The Highlanders pushed home the advantage with two tries, the best of which came from a breakout of defence as the Bulls spilled the ball in an attacking position the visitors escaped up the left flank and some weak tackling allowed them access to the line. The Highlanders looked like they might go into the break with a two-try lead but replacement fullback Sam Quelch ensured the Bulls stayed in touch with a try to narrow the gap to 12-19.

Although the Bulls displayed aerial dominance through Charlie Davey at the line-out, the Scots back row left the driving maul unchallenged and raced around on to the ball carrier on several occasions to spoil momentum and nullify the Bulls attack. Late in the half Davey was forced to retire with a head injury and Jimmy Wright took the field.

A fourth try came soon after the break for the Scots as a result of a poor exit set from the Bulls, the Highlanders forced a route to the line down the narrow left side and in the process of trying to repel the visitors Josh Collis was forced off through injury which forced a reshuffle in the Bulls pack with Luke Govier moving to flanker from the wing.

With the score at 12-24 and conditions getting rapidly heavier under-foot it might have seemed the Bulls chances had slipped away but the steely determination they have shown in recent weeks remained.

The Bulls pack now began to show their physicality with White, Davies and Lane carrying hard and Callum Large making an impact in the loose as well, two tries in quick succession from in-form flanker Jimmy Wright put the Bulls back in the game with 10 minutes remaining.

Wright’s ability to slip tackles and gain territory is remarkable and with patient penetrative rucks from Simon Matthews and Nick Arnell, he took both opportunities presented to bring the Bulls to 22-24.

At the restart the Scots were gifted a penalty from 30 metres for an infringement at the tackle area and they drilled home the advantage from distance to make the score 22-27.

The Bulls returned immediately to the Scots 22 with Harry Burn’s scurrying runs putting them into attacking positions aided by short forays from Govier, White and Fuller that tied in the Scots defence.

Liam Eaton, now at scrum-half sprayed passes left and right sending waves of attack to dent the Scots armour until he found the slick hands of Howe, Janes and Arnell who put George Lane in out wide with one tackle to burst through as he crashed over to level the scores. Unfortunately the angled conversion proved too much for Howe and the teams shared three points apiece in the Zoo Shield Division 1.