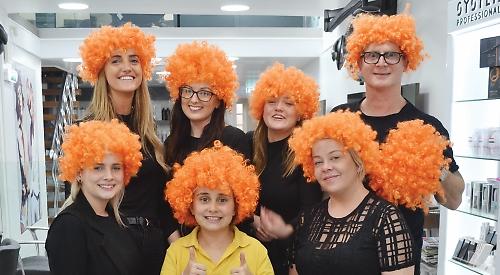 PUPILS at a Henley school wore orange wigs in a support of a classmate.

Each year, the Anaphylaxis Campaign holds Orange Wig Day to increase awareness of the condition and raise money for people affected by it.

Lilian, a pupil at Rupert House in Bell Street, has supported the campaign for the last four years.

She has been supported by Gabriel Machin butchers in Market Place and hairdressers Marc Antoni in Hart Street who have collected donations.

She said: “I feel we have done a great job every year with lots of support from people that pushes me to do even better the following year. I am proud of what we all do for the campaign.

“I think it is fantastic that the school and businesses help me raise lots of money for the charity. I love the fact that my friends are excited about wearing the wigs with me!”

Lilian, who has had the condition since she was a toddler, carries an EpiPen, an auto-injector with a single dose of epinephrine in case she suffers an anaphylactic attack and needs emergency treatment.

Her mother Clare Graham, of Northfield End, Henley, said: “I am incredibly proud of Lilian’s commitment to the campaign each year and her positive attitude towards managing life with allergies.

“In the last two years she has raised more than £1,500 and got into the top five per cent of fund raisers on JustGiving. Let’s hope she gets there again this year.”