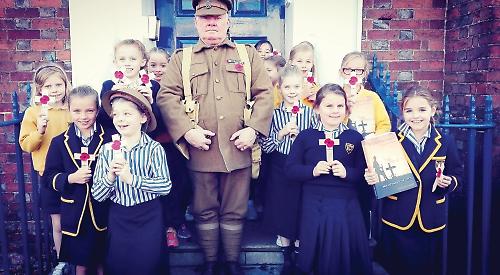 CHILDREN at Rupert House School in Henley will plant crosses to remember soldiers from the town who died during the First World War.

Pupils from years four, five and six at the school in Bell Street have each chosen a soldier from the book Bringing Them Home, which was written by amateur historian Mike Willoughby, from Woodcote, to commemorate the fallen.

The details of each soldier, including their home address, family and age when they died, will be written on the crosses which will be planted in the school’s Remembrance flowerbed today (Friday). Each cross will also have a poppy.

Teacher Sarah Williams said: “We wanted remembrance to be about the real people who gave so much for our freedom.”

Mr Willoughby visited the school on Monday to talk about the lives of soldiers during the conflict.

He dressed as a British “Tommy” and showed the children his collection of equipment and artefacts, including a replica rifle and helmet.

Mr Willoughby founded the Lest We Forget project in 2013 in order to honour hundreds of previously forgotten servicemen who died during the First World War with new memorial plaques.

The campaign has also rededicated the unmarked graves of fallen Henley soldiers and successfully campaigned for the town’s new hospital to be renamed Townlands Memorial Hospital.