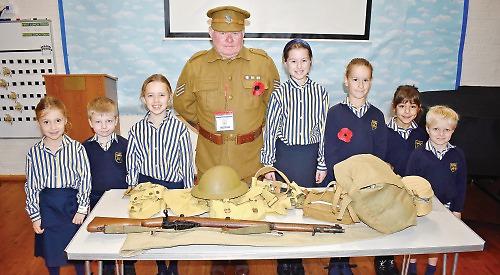 PUPILS at Rupert House School in Henley learned about life in the trenches during the First World War at a special assembly.

He showed the children the helmet the soldiers wore, which offered little protection from gunfire, and the Lee Enfield SMLE rifle, or “Smelly”, which they were expected to carry at all times and keep in good condition.

The children also learned about a soldier’s kit bag containing cutlery, a clasp knife, straight razor and a basic sewing kit known as a “housewife”.

Mr Willoughby, who wore a sergeant’s uniform and cap, talked about the tactics used by the British, including walking straight across No Man’s Land towards the enemy trenches, which resulted in heavy casualties.

He explained that more than 450 men from Henley were killed in action at a time when the town’s population was no more than about 2,000.

He said: “There probably wasn’t a single household that didn’t suffer in some way, or at the very least have a next-door neighbour that lost someone.”

Mr Willoughby has spent a decade researching the life of every Great War soldier from Henley and ensuring they are publicly commemorated as part of his Lest We Forget project.

He told the pupils: “It’s my job to explain the importance of remembrance to you so that you keep it going and pass it on to others.”