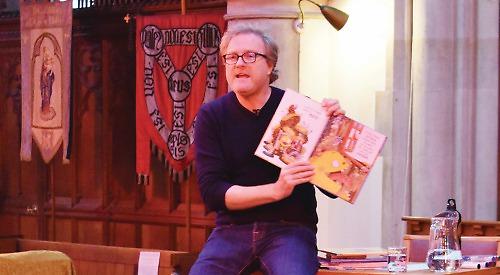 Mr Andreae, who is best known for his Purple Ronnie character, read extracts from his books including Morris the Mankiest Monster, which he co-wrote with Sarah McIntyre.

The event at Holy Trinity Church in Greys Hill was attended by pupils from Trinity Primary School and Rupert House School as well as pre-school and home-schooled children.

Mr Andreae led his audience in a dance to his book Giraffes Can’t Dance and read from his latest story, which is yet to be published, about an elephant who learns what makes him special. Afterwards, he signed books for the children and their parents before giving a writing workshop for year five and six pupils at Trinity School in Vicarage Road.

Mr Andreae said: “My job is quite solitary so when I get to talk to the people I write for it’s really interesting to see what engages them.

“Children are so lively and spontaneous so being with a whole bunch of them and talking about my books is fulfilling for them and me.

“I was surprised and encouraged by the reaction to my new story. I hope it goes down as well when it’s published.”

The event was organised by Charlotte Miles-Kingston, who runs the Little Chimes playgroup at the church, and won the prize of a talk by Mr Andreae at a charity auction held at Henley Rugby Club in May.

She was helped by Nicola Gordon, Charlotte Maggs, Olivia Lamb and Rev Duncan Carter, the vicar of Holy Trinity.

Mrs Miles-Kingston said: “It was brilliant and the children’s faces were so enthusiastic. They really enjoyed it. He played a CD and had all the children dancing.

“It was meant to be about enabling them to hear and see someone they read about when they were little.”

She thanked the church and the Bell Bookshop for its support with books.