Guess who we are 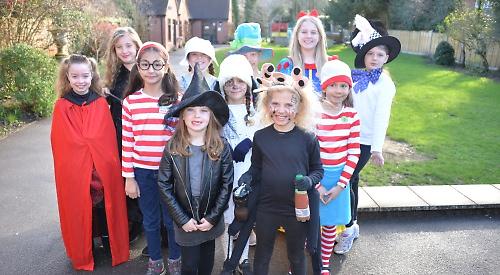 PUPILS from Rupert House School in Henley dressed as charactres including Snow White and the Mad Hatter.

Georgie Pike, 10, said: “I chose to be Bellatrix Lestrange from Harry Potter because I find the baddies far more interesting than the goodies.

“She is a complicated character with an intriguing backstory and I enjoyed finding out why some of her relatives are good and some are evil.

“I tattooed a dark mark on my arm as Bellatrix has one.”

Isabel Meah, seven, said:  “I chose to be Matilda from Roald Dahl’s Matilda because she looks just like me! It is as if we are identical twins. We have the same hair and smile.

“I wish I had her powers. I’d love to be able to move things with just my eyes like she does!”

Annabel Buff, 10, said: “I chose to be Violet Beauregarde from Charlie and the Chocolate Factory because she swells up to become a simply gigantic blueberry!

“I bought an inflatable blue costume and it was great fun wearing it and blowing it up to an enormous size — it was really funny!

“I love World Book Day because I see all my classmates and my teachers in their costumes and like trying to guess who they are.

Pictured, front row, left to right,  Millie Cullen-Heighway, seven, as the Grand High Witch from The Witches and Alice Chalmers, seven, as Charlotte from Charlotte’s Web. Middle row,  Malika Stubbs, 10, as Ada Goth from Goth Girl, Eleni Chatterjee, eight, as Wally from Where’s Wally?, Sophia Byatt Blumenthal, nine, as a Dalmatian from A Hundred and One Dalmatians and Lucinda Taylor, eight, as Wanda from Where’s Wanda? Back row, Georgie Pike, 10, as Bellatrix Lestrange from Harry Potter, Tilly Heverin, 11, as Laura Ingalls Wilder from Little House on the Prairie, Amelia Brake, 11, as the Mad Hatter from Alice in Wonderland, Sophia Hughes, 11, as Snow White from Snow White and the Seven Dwarves and Clara Coetsee, 10, as the White Rabbit from Alice in Wonderland.