School’s act of remembrance attended by rector and war historian 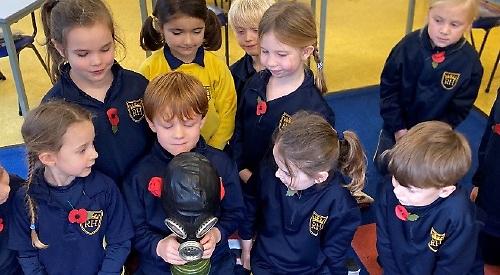 The act of remembrance was held on the school’s all-weather pitch and everyone present socially distanced.

Rev Jeremy Tayler, the rector of Henley with Remenham, reflected on the sacrifices made by others for our freedom and led the school in prayer. Amateur historian Mike Willoughby, from Woodcote, spoke of the research he has carried out on servicemen from the Henley area who died in both world wars, which led to two books, Bringing Them Home and Bringing Them Home Too.

The children stood in silence while the Last Post was sounded.

A number of year six pupils spoke about why it is important to remember the fallen then recited For the Fallen by Laurence Binyon and In Flanders Fields by John McCrae.

The school wreath was then placed in its garden of remembrance by head pupil Lola Hamilton and one of the youngest boys while headmaster Nick Armitage, Rev Tayler and Mr Willoughby placed poppy crosses. Mr Armitage said: “It is important that the children grow up understanding and remembering the sacrifices that others have made for them.

“I was incredibly impressed with the children’s respectful behaviour. Even our nursery pupils stood in silence and clearly understood the importance of the occasion.”

A number of classes spent some of their lessons on the day talking about the world wars and the significance of the armistice.

The reception children watched a thought-provoking video about a rabbit on a First World War battlefield.

They made some bright poppies and watched clips from the Remembrance Day ceremony at the Cenotaph in London attended by members of the royal family and the Prime Minister.