Being kind to each other is best way to beat bullying 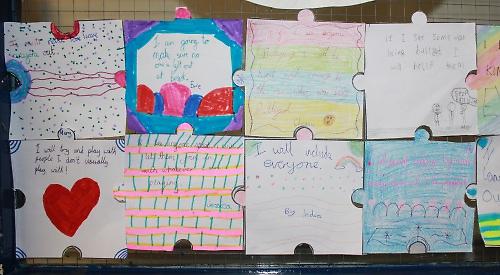 The week began with pupils, staff and even some parents wearing odd socks to show how everyone is unique.

Every child at the independent school in Bell Street was asked to donate £1. This raised £161 for the Anti-Bullying Alliance, which organises the annual initiative.

The theme of the week, which ended on Friday, was “United Against Bullying”.

During an assembly, the children watched a video hosted by CBeebies presenter Andy Day, which was broadcast to schools across the country.

During the week, they took part in activities to improve their understanding of bullying. These included role play scenarios, making posters and designing anti-bullying jigsaw puzzles.

The idea behind the jigsaws was to put across the message that, “We’re all a piece in the puzzle and together we’re united against bullying”.

The pupils were encouraged to play with different children within their school bubbles during playtimes.

Headteacher Nick Armitage said: “Everything we do is underpinned by kindness and being encouraging towards each other. Children might not think before they speak or act, so it is important to understand how your actions can affect other people.

“We all wore odd socks, including staff and even some of the parents when they came to school in the morning.

“It resonated with all of the children and it is a very important message to spread.

“No school could say they’ve never had issues with bullying, but it is about how you respond to it.

“Our aim is for the children to be kind and welcoming and to know what to look out for.”