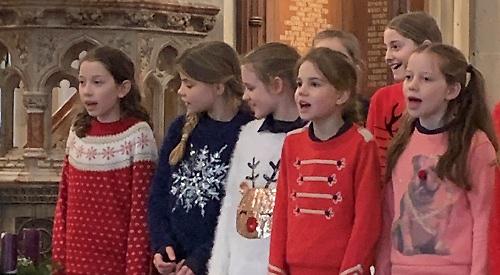 Years 3 to 6 from the independent school in Bell Street performed at the two services, which were filmed for parents to see later.

Years 5 and 6 sang sang Silent Night, Walking in a Winter Wonderland, Jingle Bell Rock and Holly Jolly Christmas. The service began with Once in Royal David’s City with the first verse sung as a duet by Charlotte Dent, 11, and 10-year-old Isabella Lumlock.

Student Mary Yan, nine, performed a piano solo of We Wish You a Merry Christmas.

Headteacher Nick Armitage said: “They were the most wonderful carol services and the children read, sung and performed beautifully.

“Like so much else this term, we have had to be that bit more creative in order to make things happen, but the carols are such an important fixture in the calendar and I am hugely grateful to Father Jeremy Tayler for allowing us to continue with them.

“It was especially poignant for the year six children as it was their last carols at Rupert House before they head off to their senior schools in September.”