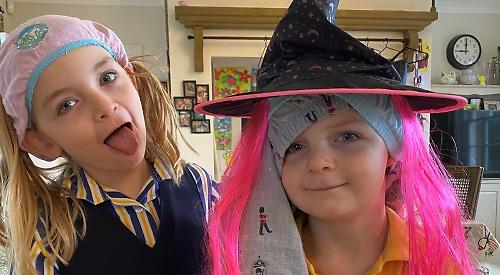 This was designed to help the children focus on something other than schoolwork and bolster their mental health.

It was suggested by the parent-run friends group of the independent school in Bell Street.

Children aged three to 11 took part by dyeing their hair different colours, using gel to spike it and incorporating props such as ribbon, bows and even a banana and a fizzy drink bottle.

Deputy headteacher Susie Newman said: “It had a real feelgood factor and helped children who were worried about using Zoom to join in. It gave them the mental stamina to be in lessons that day.”

She wore her hair in lots of baby pom-poms and with a big yellow bow. Headteacher Nick Armitage is bald so had to wear a “crazy” hat.

Mrs Newman said: “Having themed days takes the pressure off of children and makes them worry less about schoolwork.

“We have to watch their mental health as they aren’t getting the socialising they are used to, especially those without siblings.

“We want them to have a good release of any pent-up energy — we have mental health aiders who can speak to pupils online as well.”