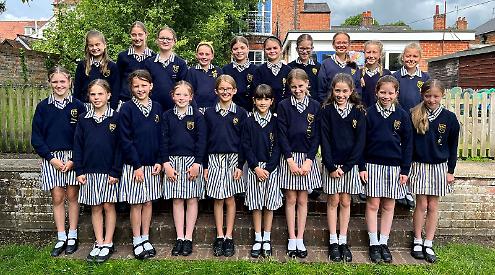 EVERY year six pupil at Rupert House School in Henley has succeeded in obtaining places at their first-choice senior school.

The 20 girls are heading off to a variety of schools, including Sir William Borlase Grammar School in Marlow, Gillotts in Henley, Queen Anne’s in Caversham, Headington in Oxford, the Oratory and Langtree in Woodcote, the Abbey and Leighton Park in Reading, St Helen and St Katharine in Abingdon, St Andrew’s Pangbourne and Newlands in Maidenhead.

Two of them also sat the ISEB Pretest and were offered 13+ places at Bradfield College and St Edwards, Oxford.

The class obtained a total of 15 scholarships and awards including academic, sport, dance and drama as well as considerable 11+success.

Nick Armitage, headteacher at the independent school in Bell Street, said: “We are so proud of our year 6 cohort who have done exceptionally well this year.

“Most importantly, they leave us as confident, kind, hard-working all-rounders who I am certain will make the most of all the opportunities they are afforded at their senior schools and beyond.

“They are a delightful group, who are a living embodiment of our school values of Courage, Creativity, Respect and Resilience and we wish them all the very best for the future.”

This is the last remaining single-sex year since the school announced it was going fully co-educational in September 2020.