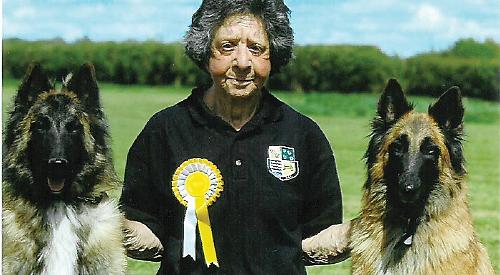 A BOY from Henley competed at Crufts and achieved his aunt’s dying wish.

Ben Harris, 11, of Abrahams Road, took Belgian shepherd Hava to the world’s largest dog show at the NEC in Birmingham on Saturday.

The dog used to belong to his aunt Linda Strange, who passed away last year but not before saying she wanted him to look after and train Hava so they could take part in the show.

The pair were one of 50 taking part in the under-18s jumping competition, organised by the Young Kennel Club.

Although they were eliminated, Ben said it was a thrilling experience.

He said: “I was really, really excited because it was my first time there. My mum was more nervous than me.”

Ben lives with his father Mick, a former RAF serviceman who now works for Henley Theatre Services, and mother Amanda Harris, who is Mrs Strange’s sister and runs Henley Doggy Day Care. The family own six other dogs.

Mrs Strange, who worked as a nurse at Townlands Hospital, was born with a condition that caused her lungs to deteriorate over time.

In 2006 she had a double lung transplant. After recovering, she bought two Belgian shepherds, Hava and Simba, who now lives with one of her two other sisters.

She joined the Thames Dog Training Club and took the dogs to obedience competitions.

Mrs Harris said: “Our family have always had animals. When we were younger we had horses but as we got older we started keeping dogs.

“But we didn’t want to have just pets, we wanted them to be active, and Linda had always been interested in obedience training.

“When Ben was born, he was a big part of my sister’s recovery. He was the apple of her eye. They did lots together so when he took an interest in dogs as well it was brilliant.”

Mrs Strange suffered renal failure in 2015 and eventually died at home in February last year at the age of 60.

When her health deteriorated, Mrs Harris started looking after Hava and then Ben took over and started agility training with her at Gemgray Dog Training in Checkendon under the guidance of Graham Tappin.

Ben, a pupil at Sacred Heart Primary School in Henley, and 10-year-old Hava qualified for Crufts after winning the Derbyshire Agility Show in July.

He said: “My aunt always used to say to me to try to qualify for Crufts with Hava and then a few months later I did it. I had thought it would take me years.”

His mother said: “It was very emotional when Ben qualified. It has been a really hard year for us and we have missed Linda an awful lot.”

Ben’s sister Jenny, 21, also works some of the family’s dogs in agility. To prepare for Crufts, Ben and Hava would train once a week with Mr Tappin and then practise in a field in Hurley that his mother rents.

On the big day itself, they left home at 5.30am in order to be in Birmingham in time to walk the course, which had 20 pieces of equipment including jumps, walls, weaves, rings and tunnels.

When it came to Ben and Hava’s turn to compete about 300 people were watching.

Ben said: “The first half went great then there was a little mistake.” Mrs Harris said: “They started really well but there was a change of direction at a tunnel and Hava went the wrong way so Ben was eliminated.

“The rest of the course they did brilliantly.

Hava will retire from competitions in the next few years and Ben will then begin to work with Rueben, one of the family’s two other Belgian shepherds, who they believe will be even more competitive and finished third in his class at Crufts.

The family’s other dogs are three border collies and a Chinese crested powderpuff.

Mrs Harris said: “I spend a lot of time doing training with them and other bits and pieces but above all they are well-loved family pets.”