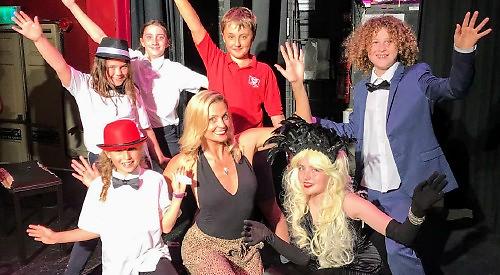 A HENLEY singer recruited six children for the filming of her latest music video.

Rebecca Poole, who is known as Purdy, was helped by the pupils from Sacred Heart Primary School for the chorus of High.

The children had been rehearsing for an end-of-year performance when the singer went to see them and decided they would be perfect for the video.

Rebecca said: “The chorus of the song goes ‘I had to get way down low to get this high’. It is a reflection of childhood and coming back to my inner child and seeing life through children’s eyes.”

The “throwback band” featured year 6 student Florence French as the young Rebecca, Felix and Didi Richardson, who have performed at a number of events in Henley, on guitar and drums, Emily Robinson on the trumpet and her older sister Jessica on bass and George Weatherly-Bates on the piano.

The video was filmed at the Kenton Theatre in New Street and the children had to master the song in order to make the visuals right, although they can’t be heard during the video. Florence wore the same style of dress as Purdy for continuity.

The singer said: “They say don’t work with animals or children but I think they proved that wrong.

“We had three hours to film the video and then the following day we had to edit it together.”

After filming, the children went for pizza to celebrate their efforts.

Felix and Didi’s father Matt Richardson, who used to sing with Rebecca in the band Lucky to be Alive, said: “She came to the rehearsal to meet them and while she was there I handed out the music for her song.

“Some of the children are only beginners with these instruments but they picked it up so fast. They needed to be able to play it properly, otherwise it would not look right in the video. It has been a really good thing for them. They have gained a massive amount of confidence from it.”

High was released on July 25 and is likely to be on Purdy’s second album, Both Sides of the Clown.