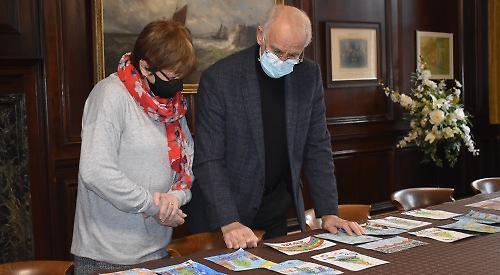 A GIRL who loves art has won the Mayor of Henley’s Christmas card competition.

Anna Brandis, 10, was chosen for her colourful drawing of a Christmas tree accompanied by a snowman, gifts and a robin.

Her design will be printed as Mayor Ken Arlett’s official Christmas card by Higgs Group, publishers of the Henley Standard.

Anna, a pupil at Sacred Heart Primary School, received a certificate from Cllr Arlett and a box of chocolates and a gift card at a private meeting on Wednesday.

Normally, a ceremony would be held at the school but this wasn’t possible due to the coronavirus pandemic restrictions.

She also had the honour of turning on Henley’s Christmas tree lights last night (Thursday).

Anna, who lives in Henley with with her parents, Matthew Brandis and Jenny Gadsden, and brother Tom, 13, was happy to win.

She said: “I just drew things I thought were very Christmassy. My favourite thing about Christmas is the tree and seeing lots of people, but obviously not this year.

“I like drawing. My favourite subject in school is art and I like drawing lots of different types of furniture.”

Mrs Gadsen said: “She put a lot of effort into it.

“She is very arty and likes to paint and draw, She drew the card at home after she read about the competition online.

“When she found out she had won, she was so excited. She called all the family straight away.”

Mr Brandis added: “I am just really pleased for her.”

More than 200 children entered this year’s contest, which had a theme of “Henley-on-Thames Magical Christmas Tree 2020”.  They included pupils at Valley Road, Trinity, Sacred Heart and Badgemore primary schools as well as independents St Mary’s and Rupert House.

The entries were judged by Councillor Arlett and his wife Dorothy.

He said it was difficult to choose a winner but Anna’s had fitted in all the elements of a magical Christmas, including the baby Jesus on top of the tree.

Cllr Arlett added: “There must have been 200 entries, which is absolutely brilliant, and we want to thank everyone for taking the time to enter and all the teachers too. It has been wonderful.”

Second and third places went to Sebastian Sheldon and Isabelle Natasha Carruthers, who are in year two at Valley Road, respectively while fourth was six-year-old Poppy Sheppard, from Trinity.

All four designs will be displayed in the showcases outside the Kenton Theatre in New Street.