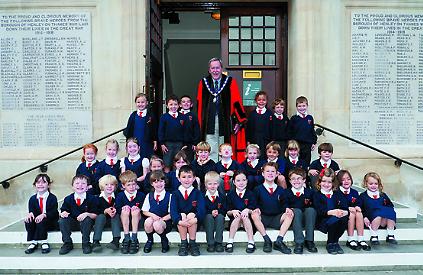 THIRTY pupils from Sacred Heart Catholic Primary School in Henley were given a tour of the town hall.

Mayor Martin Akehurst showed them his parlour, the council chamber and committee room and the main hall while dressed in full ceremonial regalia.

He explained to the youngsters how Henley Town Council works and the role it plays in local government.

Afterwards, they enjoyed biscuits and squash while asking questions about what they had learned.

Cllr Akehurst said: “It was a lovely afternoon. They asked some very sensible questions and I was impressed by how observant they were.”