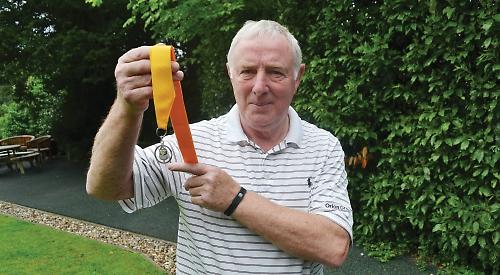 A MAN from Wargrave who joined the village scout group after leaders were impressed by his enthusiastic singing has received one of the organisation’s top awards.

Bill Bookless, 69, of Purfield Drive, was presented with the Silver Acorn after more than 30 years’ service with the 1st Wargrave Scouts.

He joined the group’s executive committee in the Eighties soon after moving to the village and his son Andy joined the cubs.

Mr Bookless helped organise events and later founded a venture scout unit for older children as well as overseeing an event for more than 6,000 scouts in Windsor in 2014.

He also oversaw improvements to the village scout hut and served as a “general dogsbody” during his three decades with the organisation.

Mr Bookless was brought up in Glasgow and as a child attended the Boys’ Brigade rather than the Scouts.

He said: “The Boys’ Brigade was the predominant organisation. It’s a Christian church set-up and as I was growing up and came from a Christian background that was what I got associated with. It does similar things but scouting is more about outside activities and camping.

“I went through the Boys’ Bridgade from seven to 18 and then became a warrant officer.”

After graduating from university, Mr Bookless worked as a chartered engineer.

He married his wife Chris, who helps with Wargrave cubs group, and shortly afterwards they moved to the village with their children, Andy and Richard.

He was attending a gang show in Twyford which Andy was taking part in when his enthusiasm drew the attention of scout leaders.

Mr Bookless said: “Being a proud parent, I was singing with gusto. I got a tap on the shoulder and asked if I would like to jump in. You cannot say no.

“I was on the executive committee, which is non-uniform and for parents who manage the group, earning funds and keeping the group going.

“The committee still runs things like the Easter egg hunt and fireworks display for the village.

“Being a village scout group helps because we are a small community and the scouts can support activities within the village.”

Mr Bookless became chairman of the committee and was involved in projects including the extension of the hut in East View Road.

He said: “There were some nights when my wife would phone me up and ask, ‘Are you lot coming home? It’s after midnight.’ It was a great period as everyone was pulling together to achieve a dream and it worked.

“I do enjoy it — I wouldn’t have done it for so long if I didn’t — but the key thing is the young people enjoying it. That’s where we get the most benefit: young people coming through and realising their full potential.”

Mr Bookless moved into uniform in 1995 when he founded the venture unit, which is for youngsters aged 15 to 20.

He said: “I blame my son — he was getting to the age where he would leave Wargrave scouts and join a venture scout unit in Woodley or Twyford.

“We talked about the need for a unit in Wargrave and it was easier for me to go into uniform.”

The unit soon grew to more than 20 boys and girls and became an explorer scouts unit when the association changed the format in 2001.

By this time Mr Bookless was group scout leader for all of Wargrave, a role he held until 2013 when he handed over to the current leader Pete Fry.

He said: “Pete was a scout and had everything that you would want from a leader. He brought new ideas. I was already thinking I was getting too old and stale.

“It’s like my wife says when she takes the cubs to the wood on Thursday night — it’s getting more difficult to jump over streams!

“I stepped back to hold the role of assistant group leader, quartermaster and general dogsbody. As a retiree, who better to go up to the scout hut during the day when the heating has packed in, the intruder alarm has been set off or a window has been broken and needs fixing?”

It was when Mr Bookless was retiring in 2013 that he saw an advert looking for people to help with a scouting jamboree in Windsor.

After putting his name forward, he became operations director of WINGS2014, in which 6,000 scouts from around the world camped out in Windsor Great Park in August 2014.

He said: “I spent what felt like 100 years organising the Windsor event. It was a challenge but a tremendous success.

“The next WINGS is 2020 and I won’t be involved to the same extent. It’s full-on but I will probably do some volunteering without camping overnight. I live so close that I can nip home!

“It gets into your blood, you go to these events and see people you last saw four or eight years previously.”

Mr Bookless was nominated for the Silver Acorn by Mr Fry.

He said: “It’s the senior award for adults in scouting. It was a pleasant shock to receive it. I don’t know why I was chosen but I accepted it on behalf of all of those scout leaders with whom I have had the pleasure of working.”

He was presented with the award in Newbury last month and wore it to the traditional St George’s Day parade in Windsor, which was attended by Chief Scout Bear Grylls.

He said: “Windsor was full of scouts from all parts of the world and several were getting the Queen’s Award, the highest award for young people.”

Mr Bookless hopes young people will continue to be involved with scouting and is already targeting his four-year-old granddaughter Ula, who also lives in Wargrave.

He said: “She is constantly collecting sticks because her daddy has told her that papa is a scout and can light fires without matches by rubbing two sticks together. She is desperate to see me do that!

“The most uplifting thing about scouting leadership is seeing young people develop and exceed all expectations.

“I have been fortunate in seeing many young people grow in ability and confidence and much of that is due to their involvement in scouting.”