Scouts hosts tea for the elderly 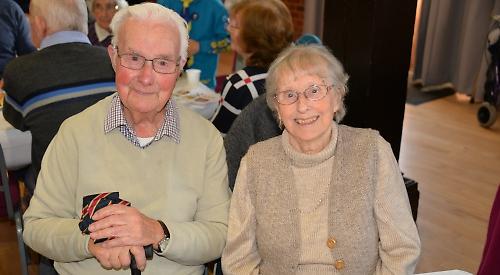 THE 1st Shiplake scout group held a community lunch for the elderly at the village’s memorial hall.

More than 70 villagers attended the event, together with about 30 children aged six to 14.

Together, they played dominoes and took part in a quiz which tested their general knowledge and the children’s ability to identify cartoon characters.

Beaver leader Kaeti Martin, 46, said: “We hold this party to bring the generations together. The idea is just to get the different ages talking, playing and doing quizzes.

“It’s about teaching the children to have respect for their elders. I believe community is important and it is just a fun event.”

She said: “I liked serving the people their food. I wanted to join the cubs because my friends did it and we get to do activities.”

Her sister Alexandra, 10, who is a scout, said: “It is nice to talk to older people and play games. There are people here who were in the war and it’s nice to hear about their experiences.”

Eric Davis, 92, of Plowden Way, Shiplake, said: “We always come because I was in this troop when I was 10. I was in the beaver patrol. We have had lovely sandwiches and all sorts of lovely cakes. They always put on a darn good show. It is terrific.”

His wife, Frida, 90, said: “It is very nice to come to this sort of thing because it gets us out. It is very good and the organisers work very hard.”

Shiplake College provided a minibus to transport the elderly to and from the hall.