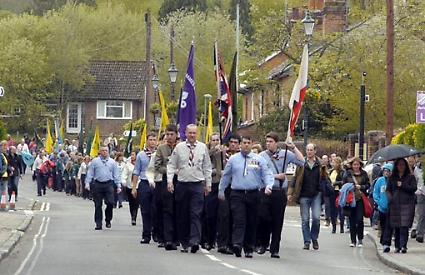 ABOUT 400 beavers, cubs and scouts from across South Oxfordshire paraded through Henley to mark St Georges Day.

Duke Street, Hart Street and part of Greys Road were closed to traffic during the parade on Sunday afternoon.

Click here to view our picture gallery of competitors.

The boys and girls marched in line from The Henley College car park in Deanfield Avenue to St Marys Church in Hart Street.

Cub leader Richard Steel and scout leader Phil Ashworth led the parade and about 40 children carried the flags of their packs. One carried a Union flag while another carried a flag bearing the cross of St George. They were accompanied by about 50 leaders.

The youngsters are all part of the scouts Thames Chiltern district, which was formed just over a year ago. It includes packs from Henley, Shiplake, Sonning Common, Goring, Goring Heath, Stoke Row, Benson and Watlington.

The Chinnor Silver Band awaited the parades arrival in Market Place and began playing marching music as it turned into Hart Street.

The scouts families lined the streets and followed them towards the church while taking photographs.When they arrived at St Marys, 12 flag bearers formed a guard of honour as the rest of the youngsters filed inside.

The hour-long service was delivered by the Rt Rev Colin Fletcher, Bishop of Dorchester. He blessed the districts new flag before the scouts renewed their promise.

After the service, the roads were briefly shut again so that the youngsters could march back in the opposite direction.

Mr Steel said: It went phenomenally well and the young people should be proud of what they achieved. They were very well-behaved and set a brilliant example for the scouting movement.

This event helps them realise theres more than just their own section out there. It helps them to feel theyre part of something bigger. Hopefully it is something they will remember for the rest of their lives.

The parade is held annually on the closest Sunday to St Georges Day.