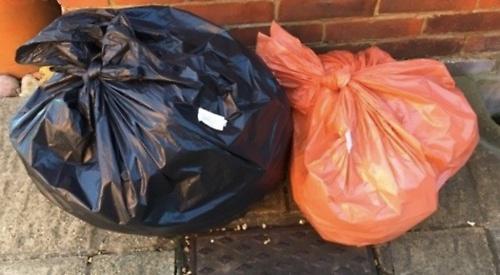 A TEENAGER from Wargrave who spends an hour each week collecting litter around the village says he wants others to follow his lead.

Andrei Woodlock, 15, goes out on Saturday mornings to pick up rubbish as part of his silver Duke of Edinburgh’s Award taks.

He says he is surprised by the amount of litter he finds and he fills almost a entire bin bag each week.

Andrei, who lives in East View Road with his mother Rachel, a nurse, and their dog Darcey, has been doing his rubbish round for 16 weeks and will continue until Easter in order to qualify for the volunteering part of the award.

He usually goes out mid-morning equipped with a litter-picker and a black bin bag. He walks up and down Victoria Road, School Hill, Mumbery Hill and other roads close to Bath Road.

He often finds piles of food wrappers and drinks cans but has also come across broken car wing mirrors and even used nappies.

Andrei, who is studying for his GCSEs at Shiplake College, said: “I noticed a lot of litter about the place.

“Lots of things get shoved in bushes and I’ve found the shells of wing mirrors. I’ve also found car tyres and by the main road there are always lots of bottles. I pick up quite a lot — nearly a whole black bin bag each time. People change their babies’ nappies and just leave them by the side of the road.

“I go around and do an hour a week and every week there’s another bag.”

Andrei completed his bronze Duke of Edinburgh’s Award last year. He got involved with his friends at school and completed the three elements, physical, volunteering and skills, as well as going on an overnight expedition in the Chilterns.

Most of his friends dropped out of the scheme after the bronze but Andrei opted to carry on.

The silver award involves longer timescales and a three-day expedition, which will be in the Brecon Beacons in south Wales. If he is successful, he plans to attempt the gold award next year.

Andrei said: “I thought the award looked cool and it’s a good experience when you go on the expedition.

“Bronze was quite easy. It was a laugh and I did it with lots of my friends to get to know what it’s about. For silver they are more strict on what you do and you also have to do an extra day on the expedition. There’s about 15 of us out of the whole year doing silver.”

Andrei played rugby for the college’s second side for his physical challenge and he is attending the school’s art club for the skills section.

He decided to choose litter-picking as it was outside school and allowed him more freedom.

He said: “I was told this was a good idea as lots of people try to do things at school like help out in lessons. This is more actual volunteering.”

Andrei says he is often stopped on his rounds by villagers, mostly to tell him he is doing a good job.

He has also been praised by parish councillors and his assessor is Councillor Marion Pope, who has to vouch that the bags he collects do contain litter from the village.

Andrei said: “I meet about two people each time who will have a small conversation with me about what I am doing. They say ‘well done’ and how great it is. Words like that definitely make it worthwhile — it’s nice that people notice it.

“I also get a lot of comments that the place would be a lot nicer if everyone did this. Doing this has made me want people to stop littering because it doesn’t look good on the streets and it’s bad for the environment. I’m surprised because I’m used to people in this area saying there isn’t much litter but every week I will go to the same places that I’ve cleaned and there will be more.

“I think some of it has been chucked out of cars and tissues can fall out of pockets but a lot of it is cans and crisp packets that have been dropped. If everyone picked up one piece of litter now and again it would help a lot.”

Cllr Pope said: “I normally organise the village clean-up, which will be held on the last Saturday of March this year. Andrei came to me to see if he could do this and I thought it was a brilliant idea.

“He has been absolutely brilliant. He goes off every week no matter the weather and comes back with all sorts of stuff. When he has finished I will give him a glowing report because he’s so conscientious.”

Steve Macpherson, Duke of Edinbrugh’s Award manager at Shiplake College, said: “The volunteering section of the award is all about making a difference in the community by giving your time to help others and change things for the better.

“Andrei has certainly done that by volunteering to pick litter.

“Other examples from the boys undertaking the award include helping pensioners through a local community scheme in Ibstone, helping Readifood distribute food to the homeless and walking the dog of an elderly person in their village.”