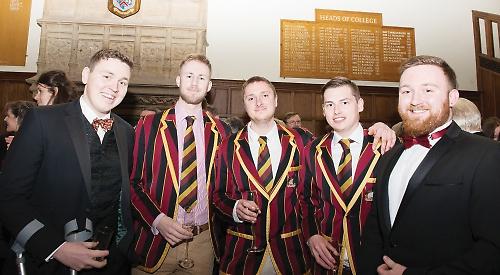 A SPECIAL dinner raised £27,000 to kick-start an appeal to build a new boathouse and activity centre at Shiplake College.

More than 200 guests, including parents, former pupils, staff and governors, attended the event on Saturday night called “It’s More Than A Boathouse Dinner”.

Guests included Fiona Dennis, chairwoman of Henley Women’s Regatta, Annamarie Phelps, chairwoman of British Rowing, and Old Vikings Will Satch, who stroked the GB men’s eight to gold at the Rio Olympics in 2016, and Ben Hunt-Davis, who won gold in the men’s eight at Sydney in 2000.

Satch and Hunt-Davis were interviewed by BBC commentator James Burridge, also an ex-pupil.

Another former pupil, Richard Lester, who won a silver at the 1976 Montreal Olympics, was presented with a Shiplake rowing blazer by chairman of governors Tim Eggar. There was also a live auction conducted by TV presenter and Old Viking Jonty Hearnden.

The £2million boathouse will provide more storage, a workshop and fitness area, a rifle/archery range, changing facilities and toilets, a climbing wall and a balcony accessed from the ergo training area that doubles up as a function room.

• Pictures from the dinner will be published next week.