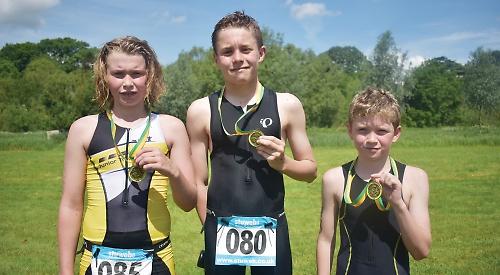 The competitors, who ranged in age from eight to 16, had to complete a swim, a cycle ride and a run in the grounds of Shiplake College in sweltering heat on Sunday.

They were cheered on by their families and friends.

The youngsters were set off in waves, starting with the swim in the Thames of between 50m and 300m depending on their age, followed by the cycle ride of between 1km and 6km and then the run of between 600m and 2.4km.

With temperatures reaching 25C, many of the young athletes had to be sponged with cold water after crossing the line.

Adam Hunt, a pupil at the school, finished second in the category for 15- and 16-year-olds in a time of 31 minutes 37 seconds, just 35 seconds behind winner Ryan Symington, from Dorset.

Adam, 15, who is from Gallowstree Common and competes for Tri Henley, said: “The swim was quite good, especially coming back downstream with the current.

“I found the cycle ride quite bumpy but it was actually a lot smoother when we had a trial run on the course last week. The run was hard with the heat. With everyone going in waves, it meant there were lots of people to chase down, which helps to keep you going.”

Sofia Smith, who is also a Tri Henley athlete, was 11th fastest girl in the category for children aged 13 and 14.

The 14-year-old said: “The swim was really, really enjoyable. The bike ride was tough in the heat and the run was exhausting but overall I thought it was really good.”

Thomas Stewart finished in 38 minutes and 31 seconds in the same category, earning him 28th position overall.

The 13-year-old, who is also a member of Tri Henley, said: “It was hard, difficult and hot. My favourite bit was the swim — I did pretty well in that. The cycle was the hardest part. I did six laps of the course and it felt like a really long way because of how hot it was.”

Ms Humphrey said: “Our club has been going for four years and we go to a lot of events across the region but we thought we could host an event ourselves because it’s such a beautiful location on the river.

“Most triathlons only offer leisure centres for swimming so it’s fantastic for the children to be able to get out in the Thames.

“It was a massive job organising the event but there was a team of volunteers who helped us.

“Those on the finish line were fantastic. They sponged people down, gave them water and helped them get into the shade.

“It was great to see some of our older members take over on the finish line and look after younger children when they finished.”

Ms Humphrey said the event would be repeated.

“The feedback we have had has been really positive,” she said. “It would be great if we could get more than 200 next year.”