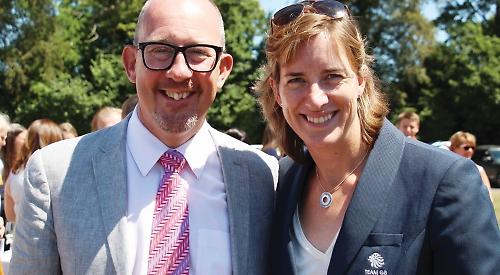 More than 1,000 people attended the event, including governors, staff, pupils, parents and other members of the community, such as the Mayor of Henley Glen Lambert and the chairman of the Shiplake Parish Council, Tudor Taylor.

Guests were greeted by sixth form prefects as they entered the marquee and entertained by the music of Ludovico Einaudi, performed by sixth form music student William Kidd.

Mr Eggar talked about how academically ambitious Shiplake College had become before announcing that headmaster Gregg Davies was to step down at the end of the 2018-2019 academic year.

Mr Davies talked about the courage of pupils and parents and thanked staff, parents and pupils for their support over the 15 years of his tenure.

Dame Katherine spoke about the importance of choice and the choices that she had made to become Britain’s most decorated female Olympian.

Head of college Will Bailey earned a standing ovation following his speech, which used famous film quotes to demonstrate how quickly time goes when at school and the importance of grasping opportunities when presented to you.

Afterwards, Dame Katherine said: “It was such an honour to be invited to celebrate the fantastic achievements of the students at Shiplake College — thank you all for having me.

“You have all done so well and I wish you all the very best for the future.”