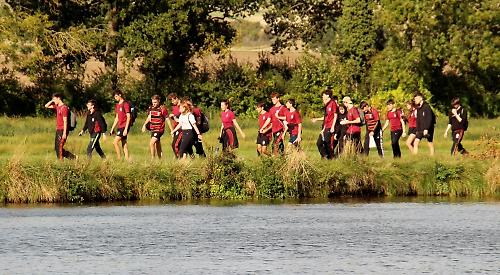 A SPONSORED walk by 410 students at Shiplake College raised more than £12,000 for charity.

They completed a 20-mile route from Moulsford School back to the college along the Thames Towpath, passing through Goring, Whitchurch, Mapledurham, Reading and Sonning.

Some ran the whole route, including Jamie Gibbs, who finished in three hours and 35 minutes, while others rowed along it.

Almost 50 members of staff also took part and another 17 acted as marshals along the route, handing out snacks to pupils and refilling their water bottles.

Eighty per cent of the money raised will go to Gap Africa, which supports schools in rural Kenya.

The college’s charities committee, made up of pupils, chose to divide the remaining 20 per cent to the Thames Valley Air Ambulance, the Nomad youth and community project in Henley, Headway Thames Valley, based at Brunner Hall in Henley, Our Lady’s Hospice and Care Services in Dublin and St Peter’s Hospice in Bristol.

Alex Hunt, assistant head (co-curricular), said: “The sponsored walk was another fantastic event that really showed the Shiplake College community at its best.

“It was great to see pupils walking and talking in mixed and varied age groups along the route.

“It is always a big effort to organise but the generosity of those who have made donations and the sense of pride and accomplishment of those who took part make it all worthwhile.”