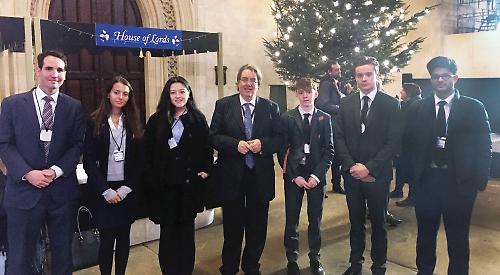 POLITICS students from Shiplake College visited the Palace of Westminster for a tour of the Houses of Parliament and to listen to the Lords debate on the Brexit withdrawal agreement.

They met Henley MP John Howell and discussed Brexit and other issues which concerned them.

The pupils, who were accompanied by politics teacher Kevin Dickey, also visited the Supreme Court

Year 12 pupil Cameron Gass said the trip was “incredibly interesting”, adding: “We were able to see a number of things, including the Archbishop of Canterbury Justin Welby speak in the House of Lords.

“We learnt a significant amount about what we have studied.”

Classmate Marcus Coulter said: “Visiting the Houses of Parliament on a day of such historical and constitutional importance was a truly riveting experience.

“Seeing such an event unfold in front of our eyes will stay with us forever.”