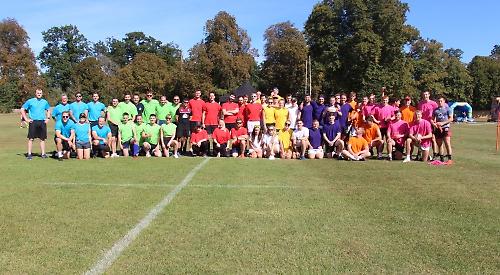 Forty dogs were entered in the show, which was organised by the parents’ association and judged by dog trainer Karen Maher.

Loveliest lady was won by seven-month-old husky-vizsla cross Vixie. The most handsome chap was Welly, a border collie-cocker spaniel cross, and gorgeous golden oldie was Boris, a nine-year-old Hungarian viszla.

The best trick category was won by Storm, an eight-year-old black Labrador, and the best sausage catcher was three-year-old collie-lurcher cross Meg.

The teams played three games each before the final in which Welsh Old Boys +2, led by former pupil Cameron Grossman, beat Baskerville, comprised of 2018 leavers.

Events and alumni officer Catherine Brazil said: “The event is now in its fifth year and seems to get better each year. It was so great to see members of the whole Shiplake community coming together for what was a brilliant, fun afternoon.”