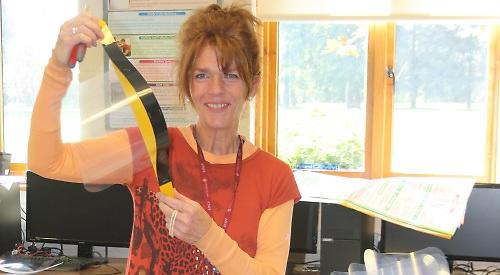 SCHOOL staff who helped to make face shields during the early stages of the coronavirus pandemic have been honoured.

The design and technology department at Shiplake College made hundreds of visors back in April when supplies of personal protective equipment were running low.

Teachers and students worked together in socially distanced groups, producing more than 100 visors a day.

These were sent to GP surgeries in Oxfordshire, Berkshire and Buckinghamshire as well as the Royal Berkshire Hospital in Reading.

The department and volunteers received the supporting the community award at the college’s inaugural Lockdown Awards, which were held online.

The awards were based on nominations made by teachers and support staff of things that stood out for them from the first lockdown in March until the end of last year.

The ceremony was hosted by headmaster Tyrone Howe, with pre-recorded acceptance messages from the winning pupils and teachers. College technician Mike Whitfield, who was part of the team that sourced the materials for the shields, said: “We wanted to do something to help.

“I got an email from one of our suppliers with a link to another school in Hertfordshire that was making masks. We contacted the supplier and they sent us some more information through.

“We had some technical issues with our laser cutter, so we had to make the masks by hand and without any kind of technology.

“The biggest difficulty was getting hold of the clear plastic material because it was in such high demand at the time.

“Initially, we just felt as though we were contributing but it became more obvious how desperate the situation was and that it wasn’t just frontline NHS staff that were struggling to get PPE. There were people in GP practices and care homes that really needed it.”

The college also donated sterile aprons and gloves from its medical centre.

Mr Whitfield was supported by teachers Tom Bayley and Sally Satch, along with Katherine Green, the school’s public relations director.

He said: “I was surprised to win the award but the reality is it was not just me. There were around 25 people from the fantastic Shiplake College community involved in the project. That included teaching and support staff and their families, pupils, siblings and parents.

“In addition we had donations from parents and Old Vikings to help with the cost of materials.

“It is lovely to get recognition and it is nice that people thought back that far to remember it. It has been a very tough time and everybody has tried incredibly hard to maintain the standards of the school.”

The other award winners were as follows:

Mr Howe said last year had been memorable and exceptional for everyone.

“Despite the many challenges that the covid pandemic has brought us, there have been just as many moments of inspiration, entertainment and a sense of going above and beyond from all corners of the Shiplake community,” he said.

“These Lockdown Awards are a way to look back over the last nine months and celebrate the many varied and excellent achievements and contributions of our pupils and staff and recognise their hard work.”