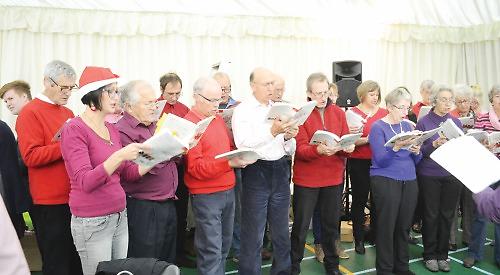 MORE than 300 people descended on Shiplake College for its annual Christmas fair.

Mulled wine was also available at the event, which was organised by the college’s parents association.

Business students from the college sold Christmas decorations and cards and some also ran a Santa’s grotto for young children.

Others sold raffle tickets for a charity event they are helping to organise later this year.

The event raised £2000, some of which will go to Gap Africa, a charity supported by the school.

Dawn Greenaway, who chairs the association, said: “Usually we have 35 stalls but this year there were 45. There was also something for younger visitors with Santa’s grotto.

“It was the best footfall we have ever had. Despite the bad weather, it was a great day and the feedback was positive from stallholders and visitors.”

David Rose, head of business at the school, said: “It is an extracurricular enterprise activity where students choose to come along.

“It doesn’t matter if they didn’t make money, we are trying to teach them enterprise skills.”