Father angry after trade waste is dumped on Thames Path 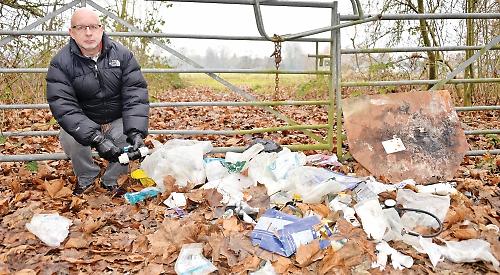 A MAN has hit out at fly-tippers who dumped trade waste on a section of the Thames Path.

The pile of rubbish, consisting mostly of pipework and empty chemical containers, was left in front of a gate near the railway bridge at the end of Mill Lane, Shiplake.

It was discovered by 15-year-old Tom Lynskey, of Crowsley Road, Shiplake who tidies a stretch of the path once a week as part of the Duke of Edinburgh’s Award scheme.

The Shiplake College student, who is aiming for a bronze award, has been doing this for about a month and will continue doing so until at least the spring.

His father Mike reported the fly-tipping to South Oxfordshire District Council, whose officers inspected the waste and took away receipts and invoices that might help them trace and prosecute the culprit.

The waste was cleared away by staff from the council’s contractor Biffa.

They also removed a tyre, a dustbin full of rusted metal and part of a canoe, all of which were dumped in nearby woodland.

Mr Lynskey, an IT worker, said: “Tom usually collects about a bag’s worth since he started but when he saw that pile he came home and said, ‘I don’t have to clear that up, do I?’

“I could see there were some sharp objects and potentially dangerous substances so I decided to report it. I wanted the council to be aware and to look into it further.

“They were very good, actually — they came out to look at it straight away and cleared it up soon afterwards.”

He called the fly-tipper “lazy”, adding: “Most of us would take the time to visit the dump at Oakley Wood, as you’re supposed to do.

“This spoils the natural beauty of the area and shows a real disrespect for the community. I’m disappointed for my son, who works hard to keep the area looking nice.”

Paul Harrison, chairman of the district council and a local councillor, said: “We always clear fly-tipped waste promptly because if you leave it, it attracts even more. It’s often left by small traders who’ve carried out home improvements and charged the client for waste disposal but have then cut a corner by not taking it to the appropriate facility.

“This offence is very deliberate as they’ve clearly chosen somewhere quiet where they hope to dump it quickly and without anyone seeing them.

“Unfortunately, you’ll always get selfish people who do things like this but we will always seek to take action against them and I would urge people to report any such instances.”

To report an incident, visit www.southoxon.gov.uk/flytipping