I'd be happy to be President Trump's Europe ambassador 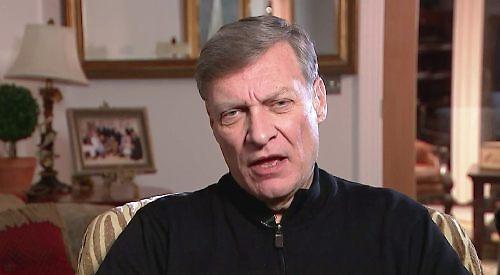 A SHIPLAKE resident who advised Donald Trump during last year’s American presidential election campaign says he would be honoured to be appointed his ambassador to Europe.

Ted Malloch, who lives in Reading Road with his wife Beth, flew back to the United States earlier this month to be interviewed for the role and an announcement is expected shortly.

It has been reported that Mr Trump, who was inaugurated as the country’s 45th president on Friday, views him as a leading candidate.

Mr Malloch, 64, was born in Philadelphia, Pennsylvania, and has been living in Britain for three years.

He moved to this area last year, when he was made professor of strategic and legal governance at Henley Business School, off Marlow Road.

He is also a senior fellow in management practice at the University of Oxford’s Saïd Business School and chairman of advisory firm Global Fiduciary Governance LLC, which is based in America.

He said: “The benefits of a Trump presidency for the UK will be demonstrable. He will bring about a new commitment and investment in the special relationship between the countries, which has been dormant over the past decade or so. I believe that, following talks between Mr Trump and Prime Minister Theresa May, you will see a rekindling that could specifically lead to a trade agreement, which will bring about a very different future as the UK ‘goes global’ in the wake of Brexit.

“I’m not a UK citizen and wasn’t eligible to vote in the referendum but was very much in favour of leave. There are many reasons but the overwhelming argument for me was national identity and securing your own borders.

“I asked myself whether the EU was something the United States would ever join and the answer was very clearly no. Britain was already half-in and half-out so it made sense to come all the way out.”

Mr Malloch, who previously taught at Yale University, said Mr Trump’s victory and the vote for Brexit were both signs of a growing “spirit of international populism” in western countries.

He said: “I believe this is a realignment of the political pendulum. It had been swinging too far and for too long in the other direction but now it’s swinging back towards the centre-right, in line with Mr Trump’s policies.

“I have met his transition team and believe there will be a decision on the ambassadorial role fairly soon, though it would be inappropriate to speculate any further. All I can say is that I would be honoured and pleased to serve.”

Mr Malloch has lived in Britain before and said he was a “committed Anglophile”. He travels frequently around the country and overseas but relaxes by walking through the South Oxfordshire countryside with his two dogs, called Liberty and Justice For All.

He said: “This has to be one of the most picturesque parts of England. It has got easy access to London and to Heathrow airport, which is very important to me, but I love walking along the beautiful trails and paths.”

He told presenter Krishnan Guru-Murthy: “I think there’s a difference between overstatement, embellishment and hyperbole compared with lying and I don’t believe Mr Trump is a liar.

“A common negotiation technique in business and politics is to put your best foot forward and overstate your position or take it as far as you can and then make a compromise. That’s still the definition of politics — the art of compromise.

“At his inauguration, Mr Trump threw down the gauntlet. He said he would make America great again and in a way that could be measured and charted.”

Mr Malloch denied that he would work to break up the EU further if he was given the ambassador’s job.

He said: “I don’t think that’s a diplomatic role. The decisions will be made by European people in their own elections this year.”