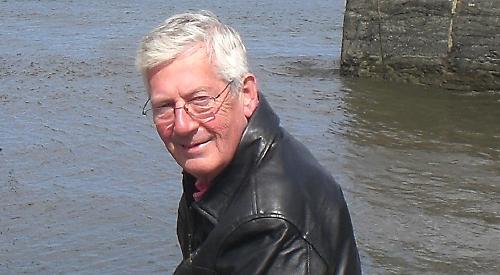 BORN in Liverpool, Peter Hose was 28 when he arrived in Henley in 1974 to take up his first teaching job (economics, politics and business studies) as residential house tutor for Skipwith House at Shiplake College.

He quickly became not only an active member of the school community but was also involved in the broader communities of Henley itself, making many friends from all walks of life in the following years.

He was quickly appointed housemaster of Burr and then Orchard House, which at that time was the largest house with more than 70 pupils, including 10 boys boarding —. enough to keep you busy, one would think, but not Peter.

Teaching allowed him ample scope to indulge his interests in music, drama and sport.

As head of drama, he supported fellow teacher Dick Whittington to drive forward many developments at the Tithe Barn Theatre.

He directed more than 25 main productions. Favourites which he revisited were Journey’s End, The Long, The Short And The Tall, Waiting For Godot and Godspell.

Time spent with the Lucilla Theatre Company of Merseyside in his youth had given him a good grounding in theatre skills and he was a regular theatregoer.

Peter was a very successful coach of the rugby 2nd XV until curriculum clashes curtailed his availability, but his interest in sport did not cease.

He had started rowing on the Liverpool canals and helped set up Sefton Rowing Club so he took to Henley like a duck to water, coaching and rowing himself. Regular rowing mates included a handful of the heavy rock stars who had settled along the Thames.

When he finished as housemaster of Orchard, Peter was able to renew his involvement with the Duke of Edinburgh’s Award scheme, organising the silver expeditions and devising the routes for a move from the Lake District to the Brecon Beacons (possibly inspired by many childhood holidays with family in Wales).

At the same time he joined the army section of the Combined Cadet Force and was a lively and active member beyond his retirement.

Rather later in life than most, Peter took up skiing and participated in many ski trips with the college, friends and organised village trips. He even managed to ski down Mont Blanc (albeit, as he modestly claimed, quite slowly!).

Never one to let grass grow under his feet, even in retirement Peter didn’t stop and eventually he became a manager at the Christ Church Centre in Henley alongside Vanessa Bird.

Here he was able to continue to make a contribution to the arts and his community working with and welcoming the public.

A quiet but committed Christian, Peter more recently became an elder of Christ Church and was a much- loved member of the church and his quiet thoughtfulness made him many friends.

Family was extremely important to Peter throughout this life, as were his Liverpool roots and Welsh heritage. He had started working life at age 17 as a court clerk in Liverpool but, picked out by the Home Office for his ability at age 25, university beckoned and he studied at Exeter before changing career and arriving in Henley.

Throughout his life Peter was pleased to spend time with his parents, who came to live with him and for whom he cared in their old age, and his summer holiday trips to Wales with them and his aunt and uncle were famous!

Equally, he always had time for cousins and his niece and nephews by whom he was much loved.

His experience as a schoolteacher made him a perfect picker of Christmas presents as well as giving him an astute and supportive eye on how well his relatives were doing.

He was close to his only brother Stephen, who became a regular visitor to Henley. In the early years Stephen taught piano at Shiplake, which meant he was able to share more time with his brother.

Peter’s life was lived to the full and with great generosity and sociability. There are many other organisations with which he was involved — Rotary, the council, Leander Club — and many more “hobbies”, such as his river boat which he used regularly to treat friends and family on trips along the Thames.

He was first diagnosed with bladder cancer in 2003 and early treatment was very effective. However, sadly, it returned and early this year his health declined rapidly. Peter died peacefully, brilliantly supported by the Sue Ryder hospice in Nettlebed.