Architect and family man with integrity, sensitivity and intellect 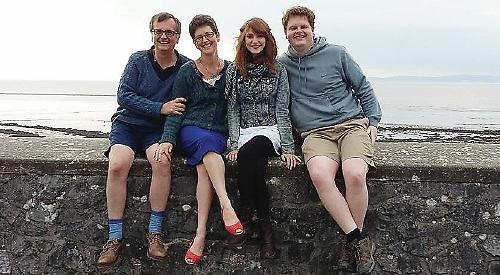 Stephen passed away peacefully at the Sue Ryder hospice in Nettlebed on March 29, aged 57.

He had been heroically fighting cancer for three years and now rests in the arms of the Lord without suffering.

Stephen was born and raised in Huddersfield, West Yorkshire.

As a teenager, he and his family moved to Keynsham, near Bristol.

To pursue his natural talent in maths and design and with his love of creativity, Stephen embarked on a degree in architecture at Bristol University.

In 1979, he met the love of his life and soulmate, Sarah, who was then living in Bristol.

Shortly afterwards, Stephen transferred to the University of Bath to complete his degree.

In November 1983 Stephen and Sarah were married in Bristol and the couple went on to have two children, Jamie, now 28, and Rachel, 25.

Stephen was a devoted husband and father.

For most of his life, he lived in the family cottage on the outskirts of Henley.

He was just a minute’s stroll away from the River Thames, a walk he became so fond of and took comfort in towards the end of his life. Stephen was a successful self-employed architect for 25 years.

As founder of his business, The Stephen Birch Practice, he was able to work from home, surrounded by his family.

Family meant everything to Stephen and he cherished being able to share many special memories together.

As the family expanded, Stephen embraced his daughter and son-in law. He became a grandfather in August 2017 to Johanna Sarah and was blessed by enjoying the first seven months of her beautiful life. As Stephen aged, he developed a love for travel, different cultures and world music.

This drove his decision to study for a masters degree in music and development at the SOAS University of London.

Working as an architect allowed Stephen to be creative in a logical and mathematical sense, while the MA allowed him to express and explore aspects of his soul that his “day job” didn’t.

Stephen was a passionate and ambitious man. He had an overwhelming love for the great outdoors and took pleasure in planning and leading groups of peers on challenging walking trips.

Over the years he completed quite a repertoire of mountain climbs in different countries including Spain, Iceland and Morocco.

Stephen found these trips not only to be physically healing but also spiritually strengthening among his Christian friends.

He had a strong faith in God. He worshiped at and devoted much time and energy to Henley Baptist Church, where he was part of the senior eldership team.

With Stephen’s empathic, caring and wise nature, he discipled many young Christians on their journey which in turn enhanced his love and faith to his father God.

He was also a talented bass player and took pleasure in being part of the worship team, playing on most Sundays.

While Stephen’s battle with cancer was a great challenge, it also deepened his faith. His calmness and peace in the end was a wonderful witness to his trust in Jesus Christ’s salvation and to what God had done for him.

A thanksgiving service to celebrate Stephen’s awesome life will be held at Henley Baptist Church on April 29 at 11am.