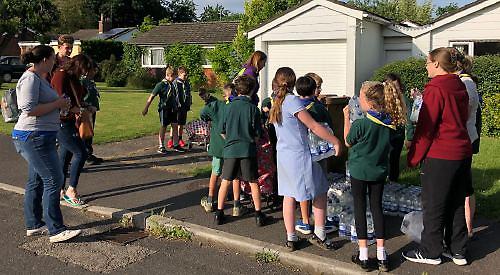 A BURST water main forced Shiplake Primary School and the village pub to close and left scores of residents without a supply.

The major leak at the A4155 Reading Road junction with Memorial Avenue and Mill Lane resulted in parts of the village having no water for most of Monday and Tuesday.

The supply was restored at about 8.30pm on Tuesday but some homeowners said the pressure was still very low, while others criticised the lack of communication from Thames Water.

The company said there had been two bursts on Tuesday on one of its 6in diameter pipes. The first affected the supply to 10 properties and the second about 150 properties.

David Morris, who runs the Plowden Arms pub with his partner Karen Rackham, said they spent most of Monday without water and couldn’t open on Tuesday evening, usually their first working day of the week.

He said he had to turn away people who had arrived for a quiz night.

“It was catastrophic,” said Mr Morris. “You can’t run a pub without water. All of our equipment is reliant on water, as are the toilets.”

Thames Water left a pallet of bottled water at the junction of Plough Lane and Reading Road on Tuesday morning but this was soon exhausted.

He said: “These things do happen but the frustration for us, and most people in Shiplake, was the lack of information as to when that was going to be resolved.”

The school was forced to close on Tuesday afternoon as it had no water for flushing the toilets.

Meanwhile, the 1st Shiplake scout group came to the rescue of residents by delivering bottled water to parts of the village on Tuesday evening.

A spokeswoman for Thames Water said: “We’re sorry to those customers whose water supply was affected by the two bursts on Tuesday.

“Our engineers worked throughout the day and into the night to fix them to make sure things were back to normal ready for people to have their morning showers and breakfast on Wednesday.

“During the repair we used tankers to pump extra water into our pipe network to keep the number of affected properties to a minimum and delivered bottled water to those people on our vulnerable customers register.”