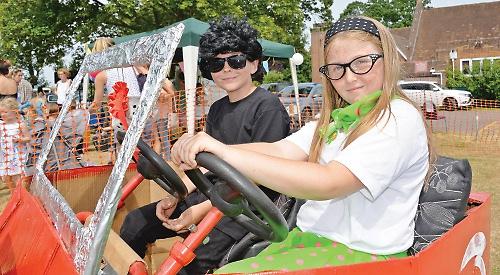 THE organiser of Shiplake fete has signed off after five years and a successful last event.

Elaine Waugh, who took charge on behalf of Shiplake Primary School’s parent-teacher association in 2013, was delighted by the hundreds of people who attended the fete at the village’s memorial field.

It had a theme of Fifties rock ’n’ roll but featured traditional fairground games and attractions including children’s races, a dog show, coconut shy, book stalls, hook-a-duck, face-painting, a raffle and an ice cream van.

The fete began with a “wacky wheels” parade in the main arena for which children had decorated their bikes, tricycles and carts in Fifties style.

The award for the best wheels went to Molly Mullaniff, 11, and her brother Billy, 10, who were in a pedal cart made to look like a “hot rod” car. It had a cardboard chassis painted red with white flames and the children had used foil pie dishes for headlights and kitchen foil for the “chrome” radiator grille.

The siblings were dressed like characters from Grease with Billy in a jet black wig and sunglasses and his sister in a polka-dot Alice band and neckscarf with horn-rimmed glasses.

Molly said: “We already had the cart and the whole family worked together on decorating it. It was fun.”

In the dog show prizes were awarded in categories including most handsome male, prettiest bitch and “golden oldie” for the healthiest dog aged over 10.

There was also a prize for the dog that sat for the longest time after being commanded to do so.

Tricia Halstead, a year 4 teacher at the primary school, led her pupils through a dance routine to Stupid Cupid and children from the Stageworks performing arts academy also performed.

There were children’s races in different age groups and the “diner dash”, a relay in which they had to wear a chef’s hat and rummage around in sawdust for items of food.

The afternoon concluded with a tug of war between boys and girls, which the girls won, and another in which a group of fathers defeated a team of mothers.

Mrs Waugh, of Harpsden Road, Henley, whose children Janey and Matilda Manly attend the school, said: “It was a great success. It was really touching to see it going so well in my final year. It’s a great community event and you could just tell from the atmosphere that everyone was having a wonderful time.

“I took it on six years ago because they were desperate for help but it’s time someone else took over and I hope they find somebody to keep it going.

“My feelings are mixed because it has been such a joy over the years but it has been a lot of work so there’s a sense of relief too.”

The proceeds will go towards the £25,000 refurbishment of the school playground.