Diners and residents evacuated as blaze rips across land 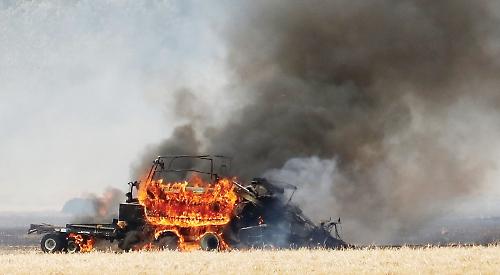 A RESTAURATEUR has thanked firefighters after a blaze which destroyed 20 hectares of arable land almost claimed his business as well.

Chef Ryan Simpson-Trotman, who runs Orwells in Shiplake, had to evacuate his staff and diners during the drama.

The fire broke out at about 1pm on Thursday last week after farm machinery caught alight in a straw field behind the restaurant in Shiplake Row that had been dried out by the heatwave.

The flames spread quickly across the field in the strong winds and thick plumes of black smoke could be seen for miles around.

Residents who gathered in Plough Lane to watch the drama could feel the heat from the blaze.

About 60 firefighters wearing breathing apparatus spent more than an hour bringing the fire under control and preventing it from spreading into nearby fields.

The blaze destroyed the restaurant’s fence, bin area and damaged an outbuilding.

Mr Simpson-Trotman, who runs the restaurant with his husband Liam, said: “If the firefighters hadn’t been there Orwells would have been in flames. I feel very, very lucky.”

He had just started lunchtime service when he heard several “explosions”.

Mr Simpson-Trotman said: “It sounded like a shotgun going off and I thought it was a pigeon shoot.

“We had the first two tables in and I had got my suckling pig in the oven when one of the customers said ‘we can smell smoke’.

“We went up to the bedroom to have a look and before you knew it the whole field was on fire.

“We put two and two together and evacuated the building. It just made sense to get out.

“We removed anything expensive, anything that was flammable, and got our two beagles out.” He and four staff and six diners left the building and several houses nearby were also evacuated.

Mr Simpson-Trotman said: “The wellbeing of everybody was the priority and to make sure they got out safe and sound.”

The restaurant remained closed that evening and on Friday lunchtime because it required deep cleaning due to the soot and smoke damage. It re-opened on Friday evening.

The land is owned by the Phillimore Estate and is farmed by the Doble family.

Stephen Doble, who runs Shiplake Farm, said he had already harvested the field and had sold the straw to Amner’s Farm. Their worker, Adam Timms, was baling it when the fire started in the baler.

He said: “He managed to get the tractor off the baler and went to get a cultivator to start making fire breaks and while he was doing that the tractor caught fire.

“The firefighters did an incredible job of keeping it out of the gardens of the homes and spreading across the road.

“We saw smoke at about 1pm and immediately went up there with our water tanker but we quickly realised it was more than we could deal with.”

Their neighbours from Phillimore Farms arrived on the scene and helped create the fire breaks along with Charlie Knight, from Frizers Farm in Sonning and staff from Amners Farm in Burghfield.

Mr Doble added: “The great relief is that nobody was hurt and none of the houses was damaged but it’s frightening how quickly the fire spread. Despite all the precautions we take, we will be creating more fire breaks in future. We lost a small amount of our own straw but in the scheme of things the impact on our business is minimal.”

He said his water tanker had been slightly damaged but was still useable.

Mr Doble thanked the firefighters, saying: “The guys stopped the fire getting to the houses and crossing the road. They were right in the thick of it and incredibly brave — it was not an easy situation.”

Amners Farm lost the tractor and baler worth about £140,000 as well as some of the straw it had purchased.

Mr Timms said he had dialled 999 as soon as he saw the smoke from the baler.

He said: “I have no idea what caused it but it has been a horrendously dry year.

“These boys [the firefighters] did a fantastic job. Unfortunately, mother nature wasn’t very kind to them and the wind changed direction and the fire picked right up.”

Kaeti Martin, beaver scout leader at 1st Shiplake scout group, said she had been worried about their hut, which is opposite Orwells and was recently re-roofed at a cost of £16,000.

She said: “I went to go to the scout hut but wasn’t allowed to go up there. I was totally horrified and quite scared. I just wanted to help but there was nothing I could do.

“If Orwells had gone up I think there would have been a lot worse to come. Without these firefighters, we would have lost the scout hut without a shadow of doubt.”

Mrs Leadbetter said: “I heard a couple of bangs and I assumed it was gun because it was over the field.

“I was in the playground and looked around and saw the smoke and then very quickly we got everybody out — it was moving so fast.

“We feel so sorry for the farmer but no one was injured, which is the main thing.”

Sam Austin, from Oak Farm in Harpsden, rushed to the scene and helped direct traffic before the police arrived and shut Shiplake Row.

He said: “I could see smoke rising as I was coming out of Harpsden and the colour of the light changed and the sunlight was coming through orange because of the smoke in the air.

“I could tell it was coming from behind Orwells. I got down the road and it was nearly impassable. There was ash coming across the road and I saw the fire on the right-hand side.

Fire crews from Henley and Wallingford attended and were supported by colleagues from the Royal Berkshire Fire and Rescue. They managed to bring the fire under control at about 2.30pm.

Properties in Shiplake Row were evacuated by police and nearby residents were told to keep their doors and windows shut. Firefighters remained at the scene overnight.

Oxfordshire Fire and Rescue Service manager Paul Bremble said: “This incident escalated rapidly because of the extremely dry conditions and a strong wind.

“We would again urge the public to take extreme care in the countryside as the heatwave continues.

“That means no open fires or barbecues except in designated areas and not throwing cigarette ends from vehicles.

“If you do spot a fire in the countryside, don’t tackle it yourself, dial 999 and give us as precise a location as you can. The quicker we get there the quicker we can contain it.”