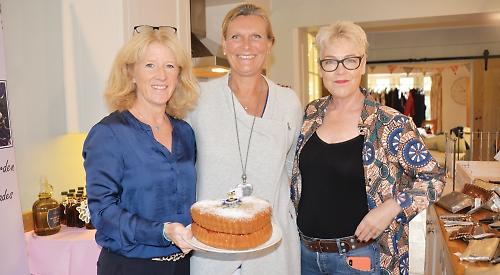 MORE than 100 people attended a coffee morning at the home of Sharon Hearn, in Mill Road, Shiplake.

She holds the event annually with her friends Joanne Gray and Kate Robinson, rotating the hosting duties each year.

This year they raised more than £1,900 with all the money coming from donations and a percentage of the profits from stalls selling clothing, shoes and dog accessories.

Starbucks, in Market Place, Henley, provided the coffee and cups.

Mrs Gray said: “It was very successful. Instead of people paying to enter we had a bowl in the centre of the kitchen where people could put in whatever they felt like donating.”

A group of parents from Moulsford Preparatory School raised £713.60 with a coffee morning at Bix Manor, which donated use of its buildings for the morning.

There were stalls selling clothing, gifts and jewellery.

Laura Wood, a member school’s parent association committee, said: “We had a great response. We are so grateful to everyone who came along to support the charity and helped to raise the money.

“There were a lot of mums from school and there was a gentleman who turned up because he wanted to support the charity and there was nothing on in his village so he came to us.”