Regatta victory that was 23 years coming 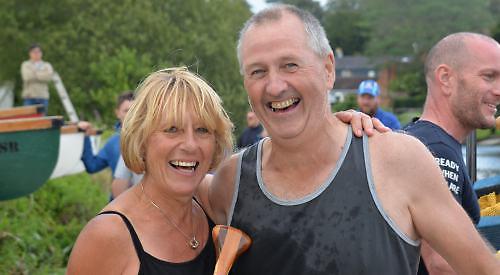 A COUPLE celebrated their first victory at the Wargrave and Shiplake Regatta in 23 years.

Peter and Susanna Hanks received the Brighten Challenge Cup after winning the final of the ladies’ and gentlemen’s Canadian canoe race.

Mr Hanks, 59, said: “For the last 20 years we have been in the final so many times but never won. We have been second about seven or eight times.

“It was such a close finish as well. We had to wait on the pontoon for it to be announced.”

The Hanks, of East View Road, Wargrave, were among 475 crews who took part in 362 races at the 152nd annual regatta, which is held off Mill Lane, Shiplake.

Around 2,000 spectators lined the banks of the Thames for the racing on Friday and Saturday.

Another couple who celebrated victory were Peter and Sandra Greenslade, from Shiplake.

She won the ladies’ singles dinghy and he was part of the Vintage Vikings crew that won the Veteran Dongola.

Mrs Greensalde, 59, said: “I won it in the Nineties and the Noughties and then earlier in this decade but I haven’t won it for a while and I want to win it again next year when I am 60.”

She planned to celebrate with “a very large glass of rosé”.

Her husband added: “I think it is the eighth time we have won and we have had several double Greenslade victories over the years. Sandra has won about 12 and I have won six.

“As you get older it gets more difficult. It helped with there being a tailwind rather than a crosswind.”

There was a wide range of races for adults and juniors in classes including skiffing, sculling and canoeing, and the competitors braved strong winds on both days.

The races came at a steady pace despite the odd heavy shower, which caused short delays to the schedule, and organisers were relieved that the event did not have to be postponed.

The crowds cheered as the competitors made their way from Shiplake railway bridge to the finish line off Ferry Lane, Wargrave.

Ben, 16, from Shiplake, said: “We all went to Shiplake Primary School and have been competing since we were about seven. We keep coming back every year and we work well together.

“It was hard to steer with the wind. The start is the hardest bit.”

Johnny Templing, 46, who was brought up in Wargrave, won the Thames dongola final with his teammates from the Bouncing Bobbies.

They were racing in memory of a friend from the village, humanitarian worker Oliver Vick, 45, who died when an Ethiopian Airlines plane crashed near Addis Ababa in March.

Mr Templing said: “It is the first time we have won. We have been in the final at least three times and we have been so close.

“I have done this since I was a 10-year-old and have only missed one or two regattas in that time.”

Ottie Kelly won both the solo and side-by-side under-12s dinghy races, the latter with her partner Molly Hall and cox Emma Knight.

The prize-giving ceremony was overseen by Peter Symons, who is honorary secretary of the regatta. It was attended by regatta president Brian Doble and his wife Pat, who own the land on which the regatta is held and whose family have been farming in Shiplake since 1904.

Mr Doble, who won the Vickerman Challenge Cup for boys' double sculling 60 years ago, posed for pictures with the happy winners.

The Hermon Trophy was presented to Nick Bisson, who has been the event’s audio and visual technician since 2005.

Mr Symons said: “The regatta was one of the few outdoor events still to be held this weekend. Many cancelled in response to the forecasted deluge.

“It is a family-friendly event. We try to have a relaxed attitude but at the same time we want to run a professional and well-organised local regatta.

“We have an army of people who support us. It is now the second-biggest regatta on the Thames and we get through more races in two days than Henley does in five. We are more than ever indebted to our subscribers. Without their support, it would be impossible to hold the regatta.”

“The villages make a big effort but we do rely heavily on people coming on the day. With the rain we had, it was difficult to expect a capacity crowd of 3,000. The regatta finances are very finely balanced, so we are very grateful to our supporters and the spectators.”

The prize-giving was followed by a fireworks display.

The regatta will return on August 7 and 8 next year.