Singer’s losing his sight but not showbiz sparkle 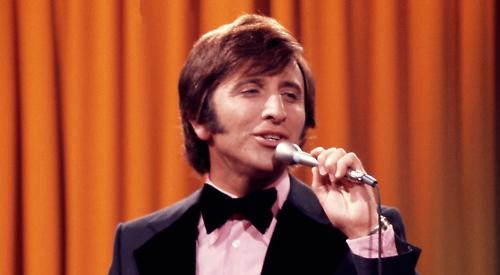 VINCE HILL says losing his eyesight was one of the reasons he retired from performing.

The 85-year-old singer, who was diagnosed with macular degeneration in 2011, was registered partially blind due to the condition worsening about two months before his last ever concert in June.

He discovered he had the disease, which is age-related and causes a progressive decline in vision, during a routine eye test and now relies on a variety of gadgets to help with daily life.

Mr Hill, who lives in Shiplake, is mostly affected in his right eye so he wears a pair of glasses with the right lens clouded over. This forces his good eye to do most of the work but also stops him judging depth and distance correctly.

He struggles to pick up objects as he can’t tell how far away they are and sometimes overfills glasses or cups when pouring drinks.

To prevent this, he has a device provided by the Royal National Institute for the Blind which clips on to the edge and sounds an alarm when a vessel is almost full.

He can hardly read text, even at double-sized fonts, because it seems to wobble up and down or side to side so he uses an electronic magnifier which blows it up
significantly.

He subscribes to the Henley Talking Newspaper service, which provides a weekly audio recording of the Henley Standard.

He also has several voice-
activated digital assistants which he can ask for information like the time or the weather forecast.

Mr Hill, who has been seeing a specialist at the Spire Dunedin hospital in Reading for about four years, had to surrender his driving licence over the summer but voluntarily stopped driving more than a year ago.

For many years his sight was still good enough to drive but he began to struggle with tasks like parking so was worried he was a danger on the road.

Now he is driven by friends who visit daily to help with tasks and check up on him. These include Pauline Buckett, from Henley, who was a close friend of Mr Hill’s wife Annie before she died in 2016 following an illness.

He still lives in the house the couple shared, which has a stair lift and flat levels to reduce trip hazards and has a personal alarm to summon help if he falls.

Mr Hill is supported by the Macular Society, which he joined earlier this year, as well as the RNIB. The society gives advice on living with the condition and offers 45 minutes of telephone counselling every week, which he says is a valuable lifeline so anyone suffering from the condition should seek help.

The singer said: “They’re absolutely marvellous. It’s helpful talking because things come out that you wouldn’t say to anyone else. It helps to know your experiences are common and you’re not the only one.

“This is a very frustrating condition. It inhibits me in many ways and makes me twitchy about things like my mobile phone, which has been hurled across the room a few times.

“It’s hard to make it do what I want — like in that Morecambe and Wise sketch, I’m pressing the right buttons but not necessarily in the right order. I’m far from short-tempered but it sometimes pushes me to that point.

“I’ll now reach for something like a knife or fork and think I’ve got hold of it when I haven’t, which irritates me like mad. I have to really consider whether I’ve got a decent grip before lifting anything.

“I can’t see faces very clearly from a distance unless they’re in very good light. If it’s a bit dark I’ll sometimes ask, ‘sorry, who are you?’ It’s not really funny but you’ve got to be able to laugh at it.

“I can’t drive as I’d be a danger — you can laugh if you pour a glass of wine on to the table but it’s very different to have that problem on the road.

“I want to keep my independence for as long as possible so I’m lucky to have lots of adaptations at home. I get plenty of help from friends and couldn’t get into mischief if I wanted.

“People with macular degeneration should not just struggle on their own because it happens to a lot of people and there is a lot of good help out there.”

Mr Hill didn’t realise anything was wrong when he went for a routine check-up at the Tesco superstore in Reading but the optician spotted signs of the disease when she examined his right eye.

Macular degeneration causes a visible degradation of the cells in the retina, an area at the back of the eye which transforms light into nerve signals for the brain.

Mr Hill recalled: “I didn’t know what she was talking about, though I quickly learned. Until then, I didn’t feel there was anything out of the ordinary as my right eye was always weaker than my left.

“There’s nothing you can do except monitor it and report when it’s getting worse. There are potential treatments in the pipeline but they’re a long way off.

“Using the text reader can be quite annoying because you have to move it all over the place but it’s very useful, especially for things like menus.

“Now I can’t read a thing unless I’m at a favourite restaurant where I know everything inside out.

“People will also pick up my glasses and try to clean them because they don’t realise the right lens is meant to look that way!”

Mr Hill says the condition was partly why he gave his farewell concert at the Belgrade Theatre in Coventry, where he grew up.

This followed a final performance for local fans at the Kenton Theatre in Henley last year.

He said: “It was time to call it a day as it was too hard getting on stage. Being up there is fine but the backstage stuff is the trouble — if I can’t hold something while climbing stairs, I need people to hold me up.

“The show was fantastic and I got a standing ovation for every song.

“I’m now retired but, you know, never say never. I’d be lying if I said I don’t miss it at all but there are aspects I don’t miss, like the stress of getting to the venue and sorting yourself out.

“I’ve been doing it for almost 60 years since leaving the army in 1955, when I was in the Royal Signals band, and there comes a time when you lose that rush of excitement.

He says he no longer has the same enthusiasm as in the Sixties, when his version of Rodgers and Hammerstein’s Edelweiss reached No 2 in the singles chart.

Mr Hill said: “Perhaps I’ve lost my passion. There’s no feeling like somebody saying ‘guess what — you’ve sold 25,000 records today. I hadn’t expected Edelweiss to chart but when I called my producer to ask if we’d sold any, he replied, ‘yes, are you sitting down?’

“I could never understand it myself — I suppose it’s because it’s performed during a very memorable scene in The Sound of Music.

“We weren’t even sure it was worth recording initially. People kept asking me to sing it at shows and eventually we had a go after someone else got into the Irish charts with it. I’ve had other hits but nothing on that level.”

Mr Hill will make a “comeback” of sorts on December 4, when he will appear alongside T’Pau singer Carol Decker, who lives in Henley, Elvis impersonator Ben Portsmouth, Sir John Madejski and others in a charity pantomime at the Kenton Theatre.

The show, which is called Cinderella 2 — The Mrs Charming Years, is in aid of the Chiltern Centre for disabled young adults and will feature Mr Hill as Baron Hard-up.

He said: “I’ve had my script printed in double-size lettering but it’s still difficult to read. I’m one of the few who is already working off-script because I had no choice but to learn my lines as quickly as possible.

“It’s going to be fun — I’m making more of a guest appearance with one five-minute scene and a few shorter ones. We’ve been rehearsing for three or four weeks and I’m pretty confident. It’s hardly Shakespeare so nobody will notice if I’m not perfect.”

The demos, which feature him singing accompanied by only piano, bass and drums, had been in his private collection for decades on cassettes and tape reels dating back to the mid-Sixties.

He said listening to the recordings, which have been professionally enhanced, reminded him of his heyday.

Mr Hill said: “I absolutely loved going into the studios — I still do and would happily record anything that was needed.

“It was a great time and everything had a real buzz. On top of my live shows, I was recording adverts for everything from Shell petrol to the Drinka Pinta Milka Day campaign.

“I’d jump on a train to London, quickly belt out 16 bars about cornflakes, then get another train to wherever I was performing that night.

“It was great for the cash register, although nothing like it is for pop stars now.”