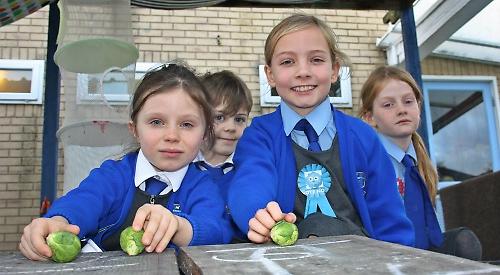 TEACHERS at Shiplake Primary School have found an interesting way to get their pupils into the Christmas spirit while learning about democracy.

Following yesterday’s general election, the youngsters will take part in a mock ballot to decide whether Brussels sprouts should remain part of Christmas dinner or be banished from the table.

They have been divided into two parties, the Anti-Sprout League and the Pro-Sprout Bureau, each of which has created its own campaign artwork and rosettes.

Teachers Bronwyn Marrison and Gilly Watt, who are for and against sprouts respectively, pinned manifestos to the school noticeboard next to a glossary of terms about the electoral process.

Miss Marrison, who teaches year 3, argues they are delicious and healthy so everyone should try them.

Mrs Watt, who teaches years 3 and 4, says they are “a bit stinky” and other vegetables should have a chance to shine at Christmas.

On Tuesday, the pupils will vote in the same way as in a real election with their classmates serving as returning officers, who will cross their names off a list before the children vote in the secret ballot using red or green tokens.

The result will be announced at the same time as the winner of a sprout-themed art competition, who will receive a small prize.

Year 3 pupil Tara Chesters, eight, who intends to vote against sprouts, said: “I don’t like them even though I’m a vegetarian because they smell and taste disgusting. I first tried them when I was about three and I ran straight to the loo afterwards.

“I prefer things like carrots, peppers and tomatoes, though my mum and dad like them so they’ll probably have them this Christmas.”

Her classmate Sebastian Speirs, seven, said: “I can’t remember when I first tried them but they’re disgusting. I’d prefer it if they weren’t served at Christmas but I think my parents like them.” But Charlotte Lee, also seven, who will vote in favour of the vegetable, said: “My grandmother cooks them with water and they come out tasting quite sweet.

“I started eating them when I was six and I’ve always liked them. We all have to have at least one sprout at Christmas but I usually have at least five.”

The pupils have been taking part in sprout-themed games and challenges during lessons and have also learned a little about how real elections work.

Mrs Watt said: “It’s a great way of getting them to understand about democracy and British values in general without bringing real party politics into it.

“It will help them make sense of terms they might hear about on the news or which their parents and older siblings might be talking about because of the election.

“They’ve had a lot of fun and I think they’ve learned a lot without it actually feeling like learning.”

With the national row over Brexit showing no signs of reaching consensus, it’s refreshing to witness a more innocent debate about Brussels.