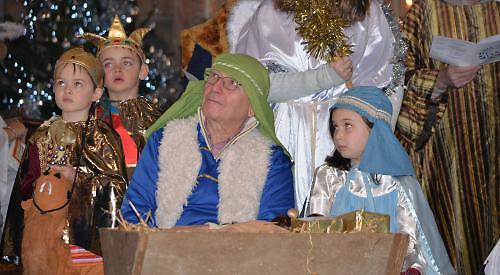 Families and regular members of the congregation headed to St Peter and St Paul’s Church to volunteer as performers in the shows, one on Saturday morning and the other in the afternoon.

The play followed the traditional story and was narrated by Rev Robert Thewsey, the rector of Shiplake.

There were no rehearsals and none of the roles was decided until people arrived at the church.

Mary was played by Adella Streather, nine, from Shiplake Cross, who attended with her sister Athena, seven, and mother Eugenie

She had been in previous years but had never taken part.

Her mother said: “We have supported the church nativity for the last 10 years since we have lived here. It is very inclusive so people can just turn up on the day and get involved if they want to. It was a nice start to our Christmas.”

The visitors sang carols in between scenes, assisted by the church choir, including Little Donkey, O Little Town of Bethlehem, Silent Night and Calypso Carol.

The audience was asked by Rev Thewsey to get involved during the performances by doing sound effects, such as snoring for the sleeping innkeeper and stomping their feet when there was a knock at the door.

Fiona Rollason and Eirlys Hughes, both from Binfield Heath, played cows, while Freddie Packham, Myles Howland and Niamh Tobin were the three kings bearing gifts on the back of camels.

In previous years, the church has paid to have a live donkey at the performance, but this year Paul Robinson volunteered to put on an animal mask and crawl on all fours as Mary rode on his back to the inn’s front door.

It was Rev Thewsey’s fourth year overseeing the nativity, which has previously taken place in a barn at Shipake Farm.

He said: “There was a bit of debate about whether or not to use the barn this year.

“Stephen Doble [the farmer] gave us permission but we thought it would be better to have it here just in case the weather was bad and because we have more facilities here.

“A lot of thought went into the costumes this year. Wendy Robinson had been going around getting extra costumes and we tried to make it a little bit more professional.

“We also wanted to rewrite the script. This is the fourth script we have used and we have been trying out different things each year.

“The story of the nativity remains the same but there are different ways of delivering the message. This year it was based on Jesus’ birthday party and the script was by Nicholas Allen.

“It is always good fun. It is a lovely opportunity to do something completely different. To be able to see vicars making fools of themselves is fun, or at least I enjoy it. I think it shows that we are human and it is nice for the children to get involved.

“It is always one of the highlights of the Christmas season for me personally. I particularly enjoy all the carol singing.

“It is a lot of work just for two performances. We have lots of costumes, which means if there are lots of people here they are all able to get involved. We have enough for 30 angels if we needed it.

“In the last few years we have had a real donkey but they are £250 a time so this year we thought it would be a lot more fun to have someone portray the donkey instead and I think that worked really well and made everyone laugh.

“Wendy made the donkey costume and then her husband Paul got in it.

“Overall, I thought it went really well. There was a lovely atmosphere and people come to see this every year because they know they are going to enjoy themselves. They come because they want to and not because they feel as if they have to.”

Shiplake College provided food and staging for the performances and guests went into the churchyard after the play to enjoy mince pies and mulled wine.