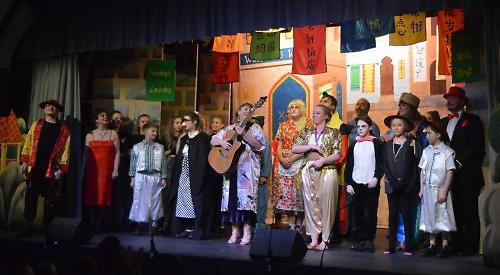 SHIPLAKE Memorial Hall was the venue for the 20th annual village pantomime produced by the Shiplake and Dunsden Dramatic Organisation.

It took place during national Village Halls Week (January 20 to 26).

This year’s panto was Aladdin, a colourful production with a cast of about 30, supported by a similar number building the set and providing the lighting and sound.

The four performances were nearly all sold out with more than 400 locals making up the audience.

“What a great way to use a community asset built in memory of all of those young souls lost more than 100 years ago,” said Philip Johnson who was stage manager and also organised the set build with Terry James

Pictured are Widow Twanky’s laundry and the final song performance.