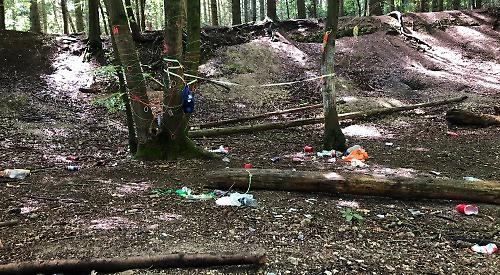 THREE illegal parties were held in and around Shiplake on Saturday night.

The following morning, residents found huge amounts of litter scattered in the woods off Woodlands Road, where a fire had been lit and was still smouldering.

The field, off Mill Lane where the Wargrave and Shiplake Regatta is usually held, was also strewn with broken glass.

An electric fence at Lashbrook Farm, near the regatta site, was cut so that the revellers could party on the land. Villagers say this is the second such incident in recent weeks.

The woodlands site, which is on a public footpath running through private land, was littered with disposable cups, beer and cider tins and bottles, carrier bags and used party poppers. Several trees were sprayed with large quantities of “silly string” which is bad for the environment as it is made of plastic.

Henley resident Clair Foster, who regularly walks through the area, was among those who raised concerns on social media and the Shiplake Villages website.

She said: “It was a scene of total devastation and really quite distressing to see as it was more than just a bit of litter — it looked like someone had had a massive party and left without clearing it up.

“It really stunned us and we’re quite cheesed off because it’s such a popular spot with families. Lots of people sent their kids along to clear it up even though they had nothing to do with causing it, which was good to see.”

Jacqueline Paice, who lives near the site, was kept awake by the partying.

She said: “They woke us all up around 1am shouting, with music playing. We found where we suspected they were and the mess they left was absolutely disgusting.”

He posted: “A warm day and ‘Costa del Shiplake’ is again littered with detritus of a few partying teens. When the Government says ‘we’ll smash corona together’, last night’s party took that a little seriously and literally smashed Corona bottles.

“If your dearly beloveds were out last night, just ask if they can spread the message... take a bin liner.”

Last month, a complaint was made when a group of more than a dozen teenagers was spotted huddling in a group and chatting on land near the River Thames towpath off Mill Lane.

There have also been complaints about increased littering of drinks containers on the towpath in the Henley area.