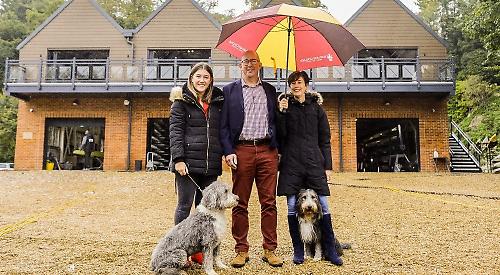 THE former headmaster of Shiplake College returned to the school for a tour of a new
£2.2 million multi-activity centre named after him.

Gregg Davies visited the Davies Centre with his wife Alison and daughter Anna.

The state-of-the-art facility on the bank of the River Thames was completed last month and includes a new boathouse, climbing wall, gym, archery and rifle range and facilities as well as storage for the college’s outdoor education programme.

Mr Davies, who was headmaster from 2004 to 2019, said: “I am so impressed with it. The gym and ergo room is fantastic, the climbing wall is the bee’s knees and the storage facilities for the boats and outdoor activity equipment are brilliant.

“It was absolutely fantastic to see a squad of girls training hard and the boys I remember from last year have grown eight inches!

“It really feels that Shiplake now has a facility that matches the ambition, spirit and ethos of the boat club.”

Mr Davies was moved to tears when he learned in May last year that the centre would be named after him. He found out during a ground-breaking ceremony to mark the college’s 60th birthday which was attended by former pupils and Olympic rowers Will Satch, Richard Lester, Ben Hunt-Davis and Malcolm Carmichael.

He was visibly shocked and became emotional when he pulled back the curtains on the foundation stone and saw his name engraved on it. The surprise was organised by four governors, including Tim Eggar, the chairman, and kept a secret.

At the time Mr Davies said the recent successes of his pupils and their coaches Dave Currie and Hugh Mackworth-Praed had convinced governors to invest in the facility. The college won the Schools Head of the River race last year and in 2017 and came second in 2018.

Its under-16 rowers won the 2018 National Schools Regatta at Dorney Lake and in May last year five sixth-formers rowed for Great Britain at the International DRV Regatta in Munich.

Mr Davies stepped down at the end of the last academic year to become education director for Bellevue Education, which runs 19 independent schools.

He was succeeded by Tyrone Howe, who moved from Uppingham School in Rutland.