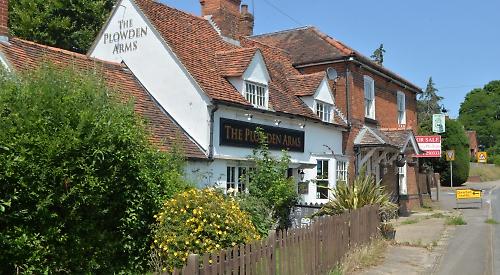 A PUB in Shiplake should remain as it is and not be redeveloped, say residents.

The Plowden Arms, which dates back to the 17th century, was closed last year and is now the subject of a planning application to turn it into six homes while retaining a smaller version of the pub.

Shiplake Parish Council is to apply to have the pub listed as an asset of community value and carried out a survey of villagers designed to provide evidence.

South Oxfordshire District Council refused a previous application, saying there was insufficient evidence to support it.

Seventy-one per cent of respondents said they would support a community bid for the Plowden Arms, with only six per cent against.

Parish councillor Chris Penrose said: “Respondents thought it very important to have a functioning, well-run pub as a social and community hub in the Shiplake-Shiplake Cross area.

“A loyal, but latent, clientele exists with much potential for future owners if it was as well run as many other local pubs.

“Seventy–three per cent of respondents had used the Plowden Arms for over 10 years. The stated intention to use it for drinks, meals, social and community events was very high.”

Heritage England has applied for planning permission to convert the first floor and roof space into two flats and the rear wing into two homes. Another two properties would be built in the pub’s garden fronting Reading Road and two more in the car park on Plough Lane.

The pub would continue trading on the ground floor but with less space.

It is owned by Karen Rackham, from Earley, who bought it from Brakspear for £450,000 in 2017 and ran it with her partner David Morris until it closed in January last year.

If the asset of community value application was approved and the owner wanted to sell the pub, she would have to wait six months to give the community a chance to make a bid but would not have to accept any offer.