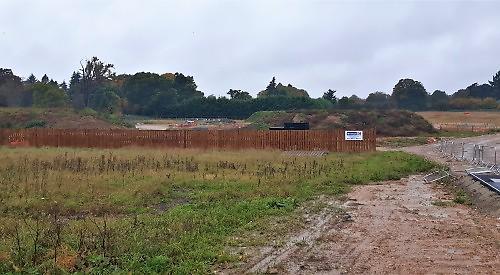 MORE than 450 Shiplake residents have demanded a bigger say on a housing development which they fear will worsen flooding.

They have signed a petition urging South Oxfordshire District Council, the planning authority, to formally consult on Taylor Wimpey’s drainage proposals for Regency Place at the former Thames Farm, off Reading Road.

The petition, launched by villager Peter Boros, has also gone to the developer as well as Housing Secretary Robert Jenrick and the Environment Agency.

Taylor Wimpey, which has permission build 95 homes on the land, wants to divert surface water along a new pipeline beneath the village centre and out into Lash Brook, a flood-prone backwater of the River Thames that runs behind homes in Mill Road.

During severe flooding in late 2013 and early 2014, houses were evacuated and the street was submerged for several weeks.

The developer had proposed draining water deeper into the ground but had to change tack when it found the site is prone to sink holes.

The council was going to assess the new drainage plan as a “reserved matter” under the existing permission, with no statutory consultation, but requested a full flood risk assessment after residents objected.

The community will have two more weeks to comment once this has been received.

But Mr Boros, of Reading Road, says the proposal has changed so much that a fresh planning application is required. This would give the community at least 28 days to respond and the council would have to alert anyone who could be affected.

In a message to Mr Jenrick, Mr Boros said: “Please do something about this undemocratic farce and review the action taken by the district council’s planning department, which appears to have a strong bias towards the applicant… [it has] done a number of things ‘behind closed doors’ and not subject to scrutiny.”

He told Taylor Wimpey: “Your company… is seeking to press on with this development and doing all it can to circumvent proper consideration and scrutiny. I hope you will take this matter seriously… and stop pursuing this in an aggressive and undemocratic way.”

The district council doesn’t usually allow public comment on reserved matters but agreed to do so because of the “volume and level of local knowledge imparted” in the objections.

Taylor Wimpey says the scheme, which it developed in partnership with Thames Water, wouldn’t increase the flood risk but has agreed to carry out a full assessment.

Westbourne Homes, which wants to build 20 homes on the field immediately to the south, has suggested its development could use the same system.

The Environment Agency says the issue doesn’t fall within its remit.