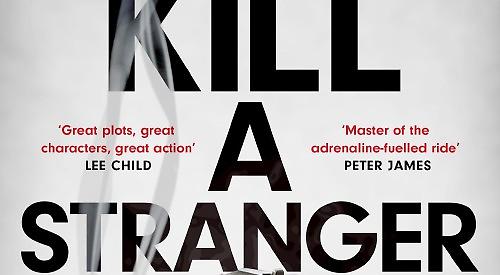 MATT WALTERS was looking to enjoy some freedom while he still could so went out for a few drinks with friends.

But when he returned home later that night his pregnant fiancée had disappeared and a dead body was in their bed instead.

Matt has no idea who she is and how she got there. She is holding a mobile phone which rings and the caller plunges him into his worst nightmare.

He is given strict instructions on what he needs to do to get Kate back but does he go through with it?

Kill A Stranger is the latest stand-alone thriller from Simon Kernick, which is published next Thursday (November 26). It is his 20th novel.

Simon, who lives in Shiplake, says the story is anything but straightforward.

He said: “The story follows three protagonists — Matt, a failed actor, Kate, his fiancée, who has a mysterious past, and her father, Sir Hugh Roper.

“Matt and Kate meet in Sri Lanka and she falls pregnant and so they decide to come back to this country to have the baby.

“When he comes home from a night out in London and finds that Kate has been abducted, to get her back he has to do something that he has never contemplated before.

“He has to kill someone and he has got 12 hours to do it and he is told where to be and when and how to do it and, if he doesn’t do it, his fiancée will be dead.

“It is more than a simple race against time thriller looking at what Matt is going to do. It is told from the perspective of three people, the third being Sir Hugh Roper, Kate’s father, and their recollections of what happened in the previous 24 hours in a police station with a detective.

“We don’t see much of DCI Cameron Doyle but he is the overall narrative voice and pops up with questions that cast new doubt on their stories.”

As the story unfolds we also learn more about each main character and how they are involved with the events that take place and each other.

We learn things about each of the characters, such as how Kate never knew her father growing up and how she only built a relationship with him after her mother passed away at 17.

She also suffered severe head injuries in an attack which saw her then boyfriend killed. The killer was never caught and Matt is unaware that this happened.

Sir Hugh is a very wealthy man who is dying from cancer and has already lost one daughter after she fell from a roof having taken drugs.

DCI Doyle interviews the three and he knows that they are all lying but he has to work from what evidence he has. Simon said: “These three people aren’t all necessarily telling the truth — possibly all of them are lying — and all the way through the book we don’t know who to believe.

“We go back in time and run through the story of each character from a different point of view. Matt figuring out what he has to do, Kate’s father pops up as well so we are never quite sure what is going on.

“Quite a lot of what they are saying is true and so it is there for the reader to try and pick the stories apart and unravel what happened.

“In the process we find a lot out about the three characters and maybe they are not quite as good as you may have thought.”

Simon’s books are known for their high body count but this time around he has focused more on the mystery element.

“It is much less violent than some of my other books,” he said. “It has a very small body count and for about four-fifths of the book there is only one body. By my standards it’s quite a peaceful book.

“The story relies very heavily on the twists and turns rather than the action. Most of my books have twists in them and it is the mystery element that I find very interesting to write about as you go into the minds of each character.

“That does make the writing process quite hard work and there were so many twists and turns in this one that even I got confused while writing it and that’s when I had to pick it apart and start again.

“I ended up writing a rough draft and I came back to it about six weeks later to make sure I got all the nuances right. It was a real challenge but in terms of the mystery element it is probably my best book. It twists right until the final page and you discover what happened in the final 10 lines.”

Simon’s favourite character to write about was Sir Hugh, whom he likened to businessman Sir Philip Green.

He said: “Hugh Roper is a self-made millionaire in the Philip Green mould who is hated by everybody and stepped on lots of people’s toes during his career.

“But you do have some sympathy with him some of the time because he is dying of cancer and his life is ending. He was a very interesting character to write about.” Simon came up with the idea for the book while out walking, which is how he comes up with most of his ideas.

He said: “I was thinking about what if someone was kidnapped, someone you really loved — I was thinking of my kids — what would I do in order to get them back?

“I also had ideas about writing a story from the point of view of a dysfunctional family with a long history, a bit like Family Secrets, and felt those two ideas would be a good combination.

“It is a plausible enough story for people to think it is believable because you can understand the motives — although I hope it doesn’t happen because it is pretty grim.”

Simon began planning the book in September 2019, began writing it at the start of October and completed the first draft in about February. After taking a break, he had finished it by April. .

“I tend to write every day and operate like working week, as if I was going into an office,” he said.

“But I do like a little bit of spare time so I might do a little at the weekend if I think I am behind or have thought of a good idea for something. I feel doing it like that motivates me. In my home office I have a view over the back garden so I feel very fortunate to have a nice space to work in.”

Simon is known for his fast-paced books, set over a short period, and admits it has taken time to hone his way of writing.

He said: “I have got used to writing at a fast pace because I have done it so many times now but it is impossible to come up with one pacy chapter after another until the book is finished.

“I write a big plan before I start, which is 30 to 40 pages and when you go back over your work inevitably there are bits in the rough draft that are a lot slower.

“I usually lose about 10 to 15 per cent of the words on the re-write because they are wasted.”

He adds: “When people ask me on tips or writing advice I always say to get the stuff written down — even if it is rubbish. It is always better to work with words than blank pages. It also helps to boost your confidence.”

Simon, who was a pupil at Gillotts School in Henley, wrote his first crime story in 1995 after becoming hooked on the genre while working as a computer software salesman.

He didn’t let more than 300 rejection letters shatter his confidence and was finally rewarded with his breakthrough novel, The Business Of Dying, part of the Dennis Milne series. Milne is a full-time police officer and part-time hit-man.

In 2007 he wrote Relentless, which was partly set in Hambleden, and was recommended on Richard & Judy’s summer book club.

• Kill a Stranger is published by Headline. It is available in hardback for £11.99. Personalised/signed copies can be bought from the Bell Bookshop in Henley.