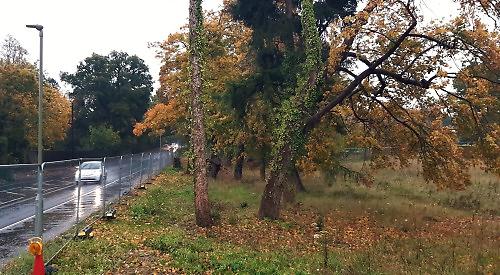 PLANS to drain surface water from a new housing estate in Shiplake into a flood-prone brook may not go ahead after all, according to the developer.

Taylor Wimpey says it is now “exploring a number of alternative options” for the former Thames Farm site, off Reading Road, where planning permission has been granted for 95 homes.

The firm wanted to channel any run-off through a new pipeline into Lash Brook, on the village’s southern edge, and was told by South Oxfordshire District Council, the planning authority, to submit a flood risk assessment.

This followed protests by residents of Mill Road, which runs alongside the “stagnant” backwater off the River Thames, as their gardens often flood and they fear the scheme would worsen the problem.

They had to evacuate their homes in early 2014 and the street was under water for several weeks.

Taylor Wimpey agreed to conduct the assessment but now says this won’t be done before Christmas so it will miss the six-week deadline imposed by the council on October 23.

In a letter delivered to every household in Shiplake, the company said it was considering other ideas and would make an announcement early in the new year. It has promised to consult further before submitting any plans.

But opponents have criticised the letter, saying that it only mentions “a proposal to drain the surface water off site” without explaining where it would go.

It provides no detail on the “alternatives”.

Taylor Wimpey previously told the council that it had dismissed other solutions as unviable.

These included connecting the site to the nearest surface water sewer, which was more than 2km away and part of a network which was already “well over capacity”.

Peter Boros, of the Thames Farm Action Group, said: “I think Taylor Wimpey sees this as a public relations exercise and is trying to whitewash everything.

“The letter is more noteworthy for what it doesn’t say than what it does and can’t truly be considered to be consulting.

“There’s no useful information at all — it’s just them saying, ‘Poor us, we’re good people but we’ve had all these nasty problems’ when those same problems are of their own making.”

Taylor Wimpey moved on to the site, which it will rename Regency Place, after landowner Claire Engbers won a planning appeal in early 2018.

It planned to channel surface water down into the earth, a common solution, but had to scrap this when it learned last year that the ground was prone to developing sink holes.

Then it proposed injecting the vulnerable areas with grout and diverting run-off into Lash Brook along a new pipeline running under Reading Road, Station Road and Mill Road.

The company would work with Thames Water, which would manage a new pumping station.

The district council was going to decide whether to approve this plan without a flood risk assessment but then postponed this after complaints from residents, who were backed by Henley MP John Howell.

Mr Howell has urged the Ministry of Housing, Communities and Local Government to intervene. Mr Boros and other objectors are due to discuss the issue further at an online meeting with the developer’s representatives on Friday.

He said: “If Taylor Wimpey is serious about other ideas, they could reduce the number of houses and locate them around a central lake.

“The houses might have to be larger but at least wouldn’t come at the expense of flooding the rest of Shiplake.

“We didn’t create this problem and shouldn’t suffer as a result of any possible solution.

“I would be interested to know why the alternatives previously weren’t ‘viable’. If it was just about money, they should meet any additional expense.”

In the letter, Taylor Wimpey managing director Novraj Sidhu said: “We’re currently exploring a number of alternative options... we would like to reassure you that we recognise and understand that the drainage strategy is a cause of concern.

“We are listening to feedback from the local community as we continue to work with consultants to investigate a number of options.

“I hope this helps to alleviate some concerns and once again assure you that we are committed to... keeping residents updated before finalising our drainage strategy.”